Southern charm. Southern architecture. Southern drawls. Life is a little slower and a little sweeter in the South, but in Savannah specifically, the cultural scene is exploding.

Once known primarily as a port city (it’s still the third busiest port in the USA), Savannah is brimming with creative restaurants, art museums, music and film festivals that take place throughout the year and lots of shops selling one-of-a-kind goods by local artisans.

Pack your walking shoes and prepare to take a stroll under moss-covered oaks through the city’s 22 squares; the Historic District is best experienced on foot with a cold drink in hand and luckily, there are plenty of shady spots and park benches where you can take a break and breathe it all in.

Smack in the middle of Savannah’s historic district, the 30-acre Forsyth Park features photogenic fountains, benches for resting or people watching, a basketball court and even a Fragrant Garden built for those with limited sight to enjoy.

On weekdays, grab a bite to eat at the tree-lined Collins Quarter. Wash down the Mushies on Toast (made with seasonal wild mushrooms) with a Madagascar Vanilla Latte or maybe a Sunrise Over Sydney Mimosa with yuzu and jasmine if you’re feeling bubbly.

On Saturdays, the massive green space transforms into the Forsyth Farmers’ Market. Grab your local artisan goat cheese, organic microgreens, honey (from multiple vendors) and candied Georgia pecans from 9am to 1pm weekly; if you miss it on Saturday, no biggie. Farm Truck 912 operates throughout the week as a mobile farmers’ market, bringing fresh fruits and veggies to Savannah neighborhoods.

At the northern point of Savannah’s Historic District, you’ll find River Street, where there are often open-air makers’ markets as well as yearly festivals like Oktoberfest and a July 4th celebration with live music, mini-golf and more.

Visit the public space anytime; it’s especially fun to walk from one end of River Street to the other, weaving in and out of shops, galleries, bars, and restaurants housed within former cotton warehouses.

Saturated, bright-colored sunsets await you nearly every night of the week in Savannah so secure a spot with a view and settle in for a show.

River Street is home to a few rooftop bars including Myrtle & Rose (a rooftop garden specializing in botanically-inspired cocktails) and Electric Moon Skytop Lounge (basically an amusement park for grown-ups with lawn games and a slide).

Grab a drink at Rocks on the Roof at the Bohemian Hotel and snap a photo of Talmadge Memorial Bridge, which separates Savannah from Hutchinson Island. There’s also Perch at Local 11ten by Forsyth Park and Peregrin at the Perry Lane Hotel, which provides stunning views of the cityscape including The Cathedral Basilica of St. John the Baptist.

Get a true taste of Black American history with a respectful visit to First African Baptist Church, the oldest continuous Black church in North America. Attend a service or take a guided tour.

First organized in 1773 by a formerly enslaved man who became an ordained minister, Rev. George Leile, the church is located in the heart of Savannah near City Market and features original stained-glass windows and lighting fixtures, as well as balcony pews and a baptismal pool. If you opt for the guided tour, ask about the church’s importance as part of the Underground Railroad.

Though the idea of spending any portion of your vacation at a graveyard might send literal chills down your spine, the cemeteries in Savannah are too beautiful to miss.

Established in the mid-1700s, Colonial Park Cemetery has been a city park since 1896 and is a wonderful place for a grounding daytime stroll amidst the buzzing of cicadas during warm, balmy summer months.

Whether you need a few minutes of peace and quiet or just want to take a little detour, this six-acre park (with a haunted history) does the trick. Established in 1750, this cemetery was the final resting place to hundreds who lost their lives to yellow fever.

Nearly a century later, Union soldiers used the cemetery as a place to hide; not only did they hide, but rumor has it they changed dates and names on the burial vaults and even moved some bodies around during their stay.

Right outside of town on the Wilmington River, Bonaventure Cemetery is known for its appearance in Midnight in the Garden of Good and Evil (a movie based on the book by John Berendt).

A moment of respite can be found at the surreal and serene cemetery, shaded by tall, old trees throughout; choose between a self-guided walking tour or drive through the narrow roads on warm days when air conditioning is sacred.

The Academy Award-winning songwriter and lyricist Johnny Mercer is buried here, as is Conrad Aiken, the famed writer, poet and Pulitzer Prize winner.

Into ghost tours? History tours? Eating tours? In Savannah, there’s a tour for every interest.

For just $20 per person, you can ride around town, top down (in a car that was used for transporting the dead) and learn the funny, often creepy and unbelievable paranormal history of people who once inhabited Savannah. Bask in the moonlight and the humidity, and ask your guide for haunted pub recommendations — because those are a thing, too.

Savannah is a bookworm’s paradise. Besides having so many great nooks and crannies for reading (park benches, grassy patches, etc.), there’s a large selection to choose from at the local independent bookshops in town.

E. Shaver Booksellers has an interesting history as it was built by Eliza Jewett in 1842 (a female builder was quite uncommon at the time) as her personal residence. It became an antique shop and then finally a bookstore when a couple from Kentucky (Ed and Esther Shaver) visited Savannah on their honeymoon and fell in love with the space.

Here, you’ll find plenty of books about Georgia’s history as well as a couple bookshop cats. Then there’s The Book Lady, a women-founded shop opened in 1978 that specializes in rare and out-of-print books.

With a prominent art school, Savannah College of Art and Design, spread out all over the city, it’s no wonder there are so many galleries and museums in Savannah. Visit the SCAD Museum of Art, a contemporary art museum featuring pieces by established international artists, meant to be appreciated by art lovers and SCAD students, alike.

Telfair Museums is made up of three separate museums: the Jepson Center, known for its modern art collection and photography (people also host weddings and black-tie events in the beautiful lobby space that includes floor-to-ceiling windows, a three-story central staircase and views of nearby Telfair Square).

Telfair Academy with its 19th century American art and silver mixed in with some European pieces; and the Owens–Thomas House & Slave Quarters, a National Historic Landmark Site which aims to shine a light on slavery in the early 1800s and educate visitors on how it affected Southerners in and out of their homes. Visit one or all three; our pick is Telfair Academy, the first public art museum in the South and the first female-founded museum in the USA.

Plan a thespians night out on the town at Savannah Theatre (one of the oldest continually running theatres in the US) or Lucas Theatre for the Arts. Check individual websites to see what’s playing on any given day.

Trustees Theater is also a Savannah landmark where events, like SCAD’s yearly fashion show, take place. If you have time before or after the show, pop into Leopold’s Ice Cream; the shop has been serving award-winning, homemade sweet treats since 1919.

The beauty of imbibing in Savannah is that you can drink from a gorgeous glass in a fancy bar and when you’re ready to move on, the bartender will gladly hand you a plastic cup so you can transfer your beverage and move on to the next spot.

Make a reservation at Artillery Bar, get dressed up and amble over to this historic and visually stunning space with an extensive spirits, champagne and wine menu. If you’re in the mood for a dive instead, head to Pinkie Master’s or Abe’s on Lincoln for loud music, cheap drinks and a (sometimes) rambunctious crowd.

Hop in the car and head to Tybee Island. Just 18 miles from Historic Savannah, this barrier island is known for its pier, pavilion, wide, sandy beaches and shops. Take a paddleboard to the uninhabited Little Tybee Island. If you’re traveling with a pet, that’s fine. Little Tybee Island, which is only accessible by boat or kayak is pet friendly and a great place to spend a night camping.

On Cockspur Island between Savannah and Tybee, you’ll find a Civil War fort that was designated a national monument in 1924. Pick up a day pass or an annual pass if you plan to return and do some hiking around Fort Pulaski, where you’ll discover trails, marshes, beaches and ruins.

Dine inside an old Greyhound station at The Grey. Opened in 2014 inside a 1930s art deco Greyhound Bus Terminal, this restaurant is all heart. Chef Mashama Bailey was featured on Netflix’s Chef’s Table and deserves all the praise (and more!) her modern Southern restaurant receives.

Her menu combines personal experience with seasonal, local ingredients, European wines and Atlantic Trade liquors and varies from evening to evening. A fan favorite is the seasonal corn pudding cake with caramelized peaches, corn flakes and vanilla cream. Reservations are highly recommended and dinner is four courses for $75 per person.

If you want something a little more casual, plan to eat at the restaurant’s Diner Bar where fresh oysters, deviled eggs, salted fish croquettes and butter bean falafel are on offer, or visit for brunch — you can’t go wrong with the crab beignets, the fried chicken and hoe cakes or the country pasta.

Wed Jul 28 , 2021
LONDON (AP) — The European Medicines Agency on Friday recommended authorizing Moderna’s COVID-19 vaccine for children ages 12 to 17, the first time the shot has been authorized for people under 18. The EU drug regulator said research in more than 3,700 children aged 12 to 17 showed that the […] 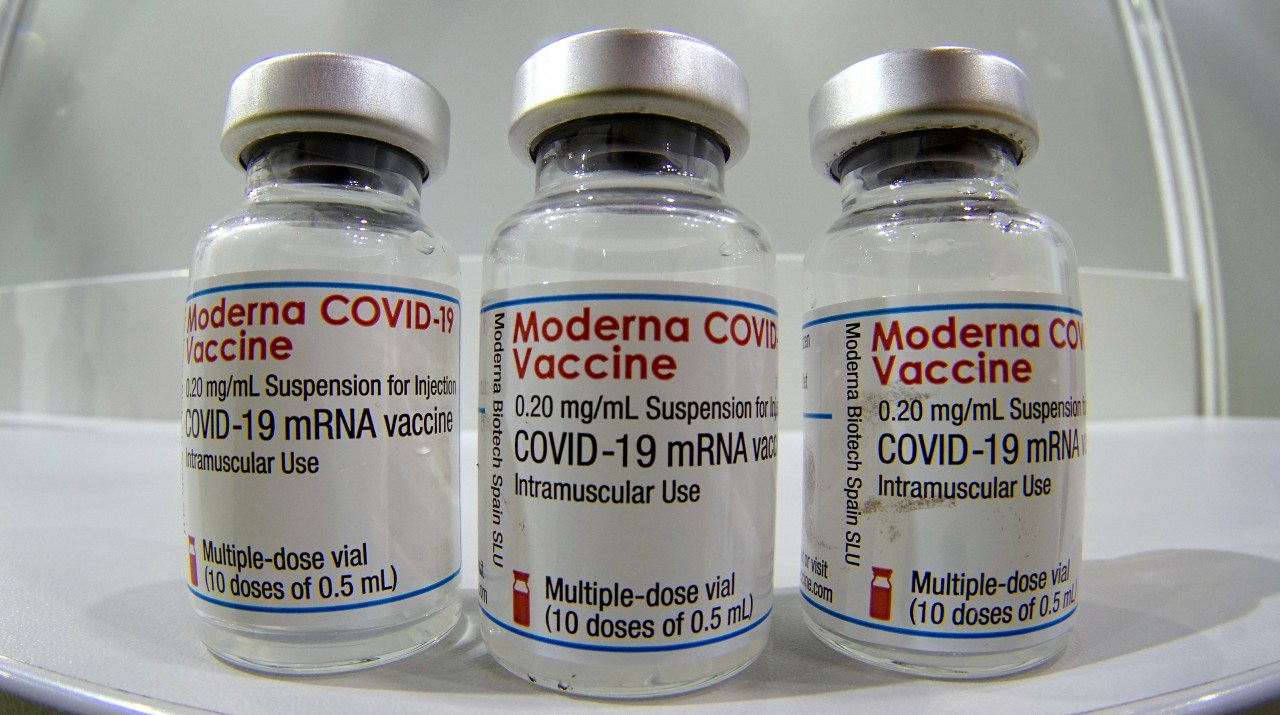