Andres Perekalski planned to defer the COVID-19 vaccine for a year.

The 43-year-old restaurant owner said he didn’t know what to believe about the coronavirus or the vaccines. He admits he didn’t talk with a doctor about his concerns and instead relied on information from his social-media feeds.

While Perekalski is unvaccinated, his wife decided to take the shots when they returned from a trip to Florida earlier this summer. She told him she trusted the science behind the vaccine.

At that point, he said he would rather wait.

On HoustonChronicle.com: With delta ‘picking off’’Houston’s unvaccinated, Hotez and other experts say 3 things can stem tide.

Three weeks ago, his 10-year-old daughter said she had a sore throat and quickly developed a fever and cough. She was fine after three days, but then his 6-year-old son started feeling “weird,” Perekalski said.

Days later, his entire family tested positive for COVID. Perekalski called a family friend, Dr. Luis Ostrosky, chief of infectious diseases at UTHealth and an infectious disease specialist with UT Physicians and Memorial Hermann, to see if he could take the vaccine.

“But it was too late — I already had the virus,” said Perekalski, who regrets not being vaccinated.

He believes the internet “brainwashed” him into thinking the shots contained a government-regulated chip or that they would cause premature death.

Though he had family members and multiple employees at his restaurant, Argentina Cafe Empanada Factory, contract the virus last year, Perekalski thought his immune system would be able to fight it with few complications. After all, he’s relatively young and healthy — a former professional soccer player who played in Argentina, Mexico and Asia.

“It’s just the fact that you don’t get the right information, so when you see so many crazy things on social media, you start doubting the vaccine,” he said. “In the restaurant business, even my own employees don’t trust the vaccine. They thought the vaccine was something that would get you sick in the next few years. All that goes to your head and makes you doubt the vaccine.”

After Texas Gov. Greg Abbott relaxed the mask mandate in March, Perekalski said he didn’t force his employees or customers to mask up inside the restaurant. Perekalski and his family, for their own safety, did continue to wear masks in public places.

In Harris County, there are 28,623 active COVID cases, according to the Texas Department of State Health Services. Across Texas, among the cases for which the state has demographics data, Hispanic people account for 35.8 percent of cases — the largest share. White people are just behind them at 34.9 percent of all cases.

Perekalski was admitted to Memorial Hermann less than a week after his symptoms presented. The virus was more advanced than initially thought, Ostrosky said.

He was placed on supplemental oxygen for a few days but his blood-oxygen levels did not improve, so he was moved to the hospital’s COVID intensive care unit.

“We put him on his belly, which is typical for people who have serious COVID. It’s the last step before you start doing intubation,” Ostrosky said. “At that point, he was very scared, and his wife was scared. He didn’t know it was going to be that severe that fast.”

Ostrosky said Houston doctors are seeing a new pattern arise, in which people in mixed-vaccination homes are all testing positive for the virus. But those who are vaccinated have fewer symptoms and rarely require hospitalization, he added.

“Families who are vaccinated and from within the same family as those who aren’t have completely different outcomes,” Ostrosky said. “In Andres’ cases, he was deferring vaccination and ended up in the ICU. His wife was vaccinated and had a breakthrough infection that was minimal.”

On HoustonChronicle.com: Texas Children’s took adult patients in past COVID surges. With RSV uptick, there may not be room.

Since whole families are being affected, every aspect of their lives are turned upside down for no less than two weeks, Ostrosky said. While Perekalski was in the hospital, his wife quarantined with their children at home. Neither was able to run the restaurant in person for weeks.

A Kaiser Family Foundation vaccine hesitancy survey in January found that a majority (43 percent) of Hispanic American adults wanted to “wait and see” when it came to taking the vaccine rather than immediately taking it when it was made available to them.

Eleven percent reported they would only take the vaccine if it was required, and 18 percent of all Hispanic American adults said they would “definitely not” take it.

Ostrosky said people are living in a strange world — facing the pandemic according to what they see around them.

People are making decisions based off what Ostrosky calls “micro experiences,” so they forget the world is in the midst of a history-changing pandemic where more than 615,000 Americans have died.

After more than two weeks in the ICU, Perekalski was well enough to return home to quarantine with his family. He remains on supplemental oxygen, though, and has to wait about three months before he can receive the vaccine.

He recommends everyone talk to a doctor for facts about the vaccine.

“A lot of people get brainwashed by the things you hear on social media, but you need to get the right information and go talk to a doctor,” he said. “Only talking to the right people will make you realize this vaccine will save your life.”

Sun Aug 15 , 2021
AFP PHOTO / GULSHAN KHAN via Getty ImagesBy: Pooja Shrivastava South Asian American food bloggers have called on to cancel the word curry because of its ties to British colonialism, claiming that the “word curry is too often used to lump very distinct foods from different regions together”, said […] 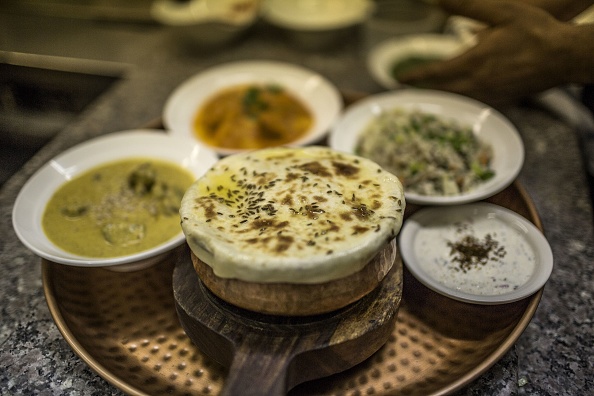