Ten European regions from boreal to Mediterranean were selected (Supplementary Table 1). They represented major agricultural land uses such as arable crops including horticulture, mixed farming, grassland and perennial crops (vineyards and olives). Within each region, a pool of ~20–40 farms was selected from which 12–20 farms were randomly selected (169 in total) that belonged to the same farm type, produced under homogeneous climatic and environmental circumstances and fulfilled specific criteria regarding their main production branch. In case the selected farms were not willing to participate, we asked other farms from the pool till the sufficient number has been reached. The selected organic farms had all been certified for at least five years. Farmers were asked if they were willing to participate in the study. If they refused, additional random sampling was conducted. In the region NL, 11 organic farms agreed to participate but only three non-organic farms, whereas seven organic farms and 11 non-organic farms were available in the region HU. During the study, one non-organic farmer in the region CH ceased participation.

The complete area of all selected farms was mapped, using the BioHab method36. Excluded from the farm area were woody and aquatic habitats larger than 800 m2 and summer pastures. Within the farm area, areal and linear habitats were recorded. For an areal habitat, the minimal mapping unit was 400 m2 with a width of at least 5 m. More narrow habitats, between 0.5 and 5 m wide and at least 30 m long, were mapped as linear habitats. Habitats were distinguished in habitat types according to Raunkiær life forms, environmental conditions and management evidence28. Further, a farmland class was assigned to each habitat that described whether the habitat was managed for agricultural production or other objectives such as e.g. nature conservation. In face-to-face interviews following a standardized questionnaire, farmers provided detailed information on field management and yield.

Based on the habitat maps and available information about management intensity, we categorized all habitats as either semi-natural habitats or production fields. In agricultural landscapes, these two categories are often not clearly distinguishable. There is a gradient from more intensively managed production fields to less intensively used semi-natural habitats. In addition, a categorization at the local scale can be different from an approach at a European scale (29 and see p. 45 of37). Here, we applied the same criteria for all ten study regions.

We categorized as semi-natural habitats: linear habitats, habitats that were managed for nature conservation objectives, habitats where mainly geophytes, helophytes or hydrophytes were growing, grasslands with woody vegetation (shrubs and/or trees), and extensively managed grasslands (no fertilization, no or one cut a year).

Vascular plant, earthworm, spider and bee species were sampled in all different habitat types of a farm. One plot per habitat type was randomly selected per farm for species sampling. This resulted in 1402 selected habitat plots on 169 farms (Supplementary Table 2). In the selected habitats, species were sampled during one growing season, using standardized protocols19,38. Plant species were identified in squares of 10 × 10 m in areal habitats and in rectangular strips of 1 × 10 m in linear habitats. Earthworms were collected at three random locations of 30 × 30 cm per habitat. First, a solution of allyl isothiocyanate (AITC) was poured out to extract earthworms from the soil. Afterwards, a 20-cm-deep soil core from the same location was hand sorted to find additional specimens. Identification took place in the lab. Spiders were sampled on three dates at five random locations per habitat within a circle of 0.1 m2. Using a modified vacuum shredder, spiders were taken from the soil surface, transferred to a cool box, frozen, or put in ethanol, sorted and identified in the lab. Bees (wild bees and bumble bees) were sampled on three dates, during dry, sunny and warm weather conditions. They were captured with an entomological aerial net along a 100 m long and 2 m wide transect, transferred to a killing jar and identified in the lab.

The ‘base coverage’ was individually defined for each region and each taxonomic group since the mixed effects models used to analyze the data took into account the variation among regions and taxonomic groups.

The difference between the species richness unique to semi-natural habitats and unique to production fields was tested with mixed effects models using package lme4 (Version 1.1-12) in R43. The data were (Sij | β, b, x) ~ Poisson(µij) from i = 1, …, 10 regions. The model is:

where ({beta }_{0}) is a fixed intercept, ({beta }_{1}) a fixed effect sub-community ({x}_{1{ij}}) (species unique to semi-natural habitats versus species unique to production fields), b1i are random intercepts for region i. Random effects are normally distributed with mean 0 and variance σ2. The significance of term ({beta }_{1}) was calculated by log-likelihood ratio tests with one degree of freedom. For the models over all four taxa, an additional random intercept was included, i.e. b2j with mean 0 and variance σ2 for j = 1, …, 4 taxa (Fig. 1b).

Differences in species richness between organic and non-organic systems

The comparison between organic and non-organic systems of species unique to semi-natural habitats and to production fields, and of species shared by the two habitat categories, relied on coverage-based extrapolation as described above. Differences between management systems were tested for significance using mixed-effects models with management system ({beta }_{1}) ({x}_{1{ij}}) as fixed effect in (1).

Farmer interviews delivered an average yield per crop type per farm for the years 2008–2010 (Supplementary Data45 shows details for organic and non-organic systems separately). Farmers indicated yield in kilograms or tons per hectare. This was transformed into energy units, i.e. mega joules per hectare (MJ ha−1) using standard values46. From this, for each region, the average yield (MJ ha−1) was calculated by first multiplying individual crop type yields by the corresponding crop type areas to obtain the production per crop type, then summing up the production of all crop types, and finally dividing this sum by the total area of the crop types. For livestock farms, the fodder production of grasslands was estimated based on the average requirements per livestock unit, accounting for the amount of feed grain, legumes, silage maize and of imported feedstuff. All yields relate to plant biomass production and do not comprise livestock products. The average yield takes into account the relative cover of the different crop types in the regions. Therefore, the conversion of the semi-natural area to production fields was region-specific. The production of certain semi-natural habitats as e.g. olive groves in Spain was not part of the production calculation. The reason is that data on production for semi-natural habitats were mainly not available and/or negligible, e.g. extensively used grassland in CH or in HU, and we decided to apply the same treatment to all the regions. Consequently, in case of olive groves in Spain the effective increase in production is overestimated. To calculate the production gain per region, the production field area added by the conversion of semi-natural habitat area was multiplied by the average yield. In practice, in many regions it may be impossible to convert semi-natural habitat to productive land due to geomorphological constraints and poor soils, and even if land were converted, yields would be much lower than these averages. The results presented here, especially the 90% scenario, are therefore over-optimistic. On the other hand, our calculations are based on the area of semi-natural habitat available for conversion on existing farms, but in some regions other sources of semi-natural land may be available for conversion, e.g. former agricultural land that has been abandoned.

Standardization for organic and non-organic systems

Further information on research design is available in the Nature Research Reporting Summary linked to this article.

Wed Sep 8 , 2021
La Duni’s newest staff members in Dallas are quick on their feet and quite polite. One even said, “I love you, you are so pretty,” after a delivery. Meet Alexcita, Panchita and Coqueta, La Duni’s restaurant robots. All of La Duni’s robots have personalities. Customers “don’t really see them as […] 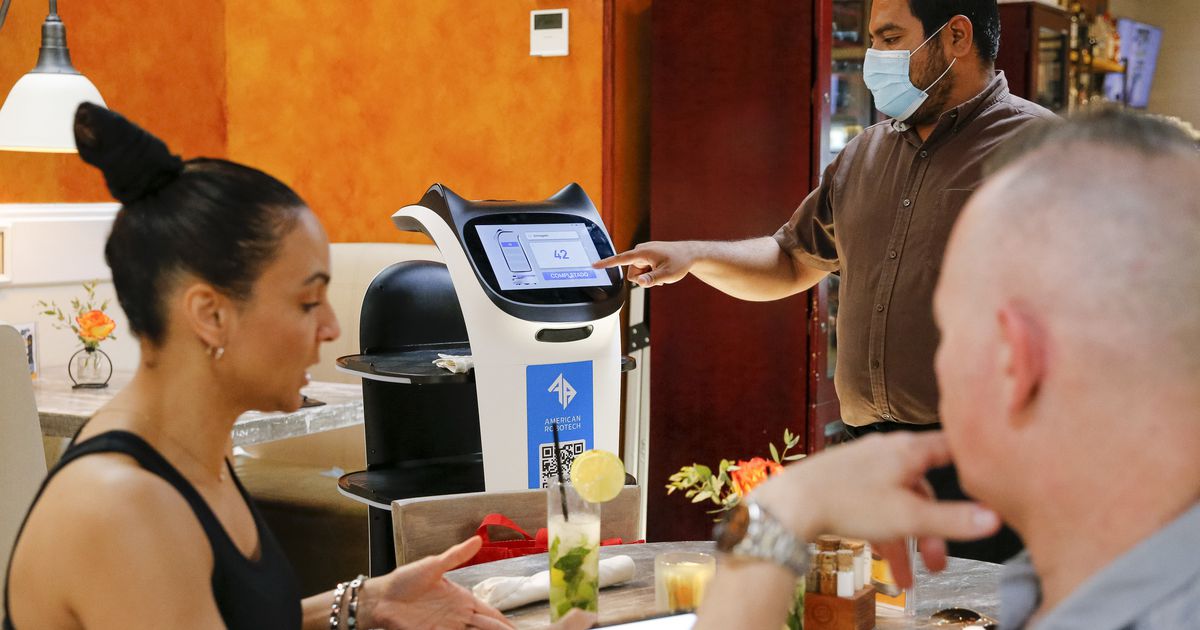