Even those with the sweetest of sweet tooths can only eat so much sugar at once, so everyone is given a thermal bag to collect their goodies, like trick-or-treating for grown-ups.

There’s much to see between tastings. This coastal town is known for its elegant Spanish Renaissance architecture. A guide points out the Lightner Museum and the opulent Flagler College. These regal landmarks were built during the Gilded Age by Florida developer Henry Flagler as luxury hotels (the Alcazar Hotel and the Hotel Ponce de Leon, respectively) in the late 1880s.

In the historic district, the smell of chocolate wafts out on to St. George Street. Whetstone Chocolates is packed so full of sweet treats, kids may feel like Willie Wonka in that chocolate factory. Nibble a dark chocolate, shell-shaped candy, or take a walk on the wild side with the lime chipotle brittle.

Next, pick a stick at The Hyppo. Gourmet ice pops come in hundreds of exotic flavors, such as cantaloupe lemon chia and pineapple jalapeño.

Those who book the Sweet and Salty package conclude the tour with a relaxing boat ride and a glass of Champagne. 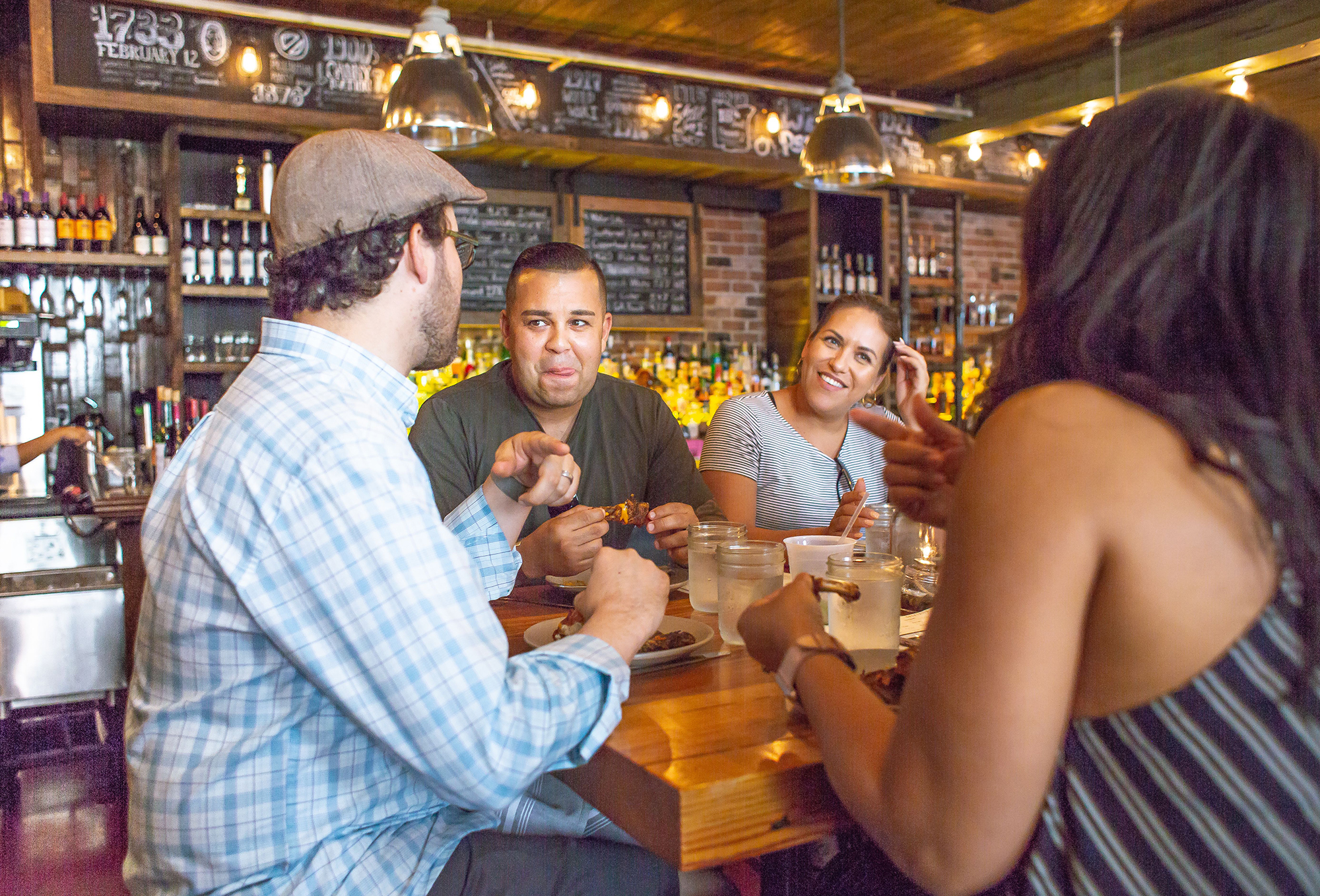 At Molly MacPherson’s Scottish Pub & Grill, hungry tourists on Savannah Taste Experience’s First Squares Food Tour tuck into cottage pie, a hearty comfort food sure to warm you up on a rainy day. Ground beef mixed with peas and carrots is topped by a light cloud of mashed potatoes.

No doubt the Scottish Highlanders who helped defend colonial Georgia would have enjoyed it, too.

“First Squares” is a reference to Savannah’s original four city squares developed in 1733 by James Oglethorpe, founder of the British colony of Georgia. Today, these shady, monument-studded squares — Ellis, Wright, Telfair and Johnson — are surrounded by noteworthy eateries.

Stu Card, co-owner of Savannah Taste Experience, says the tour introduces the unexpected side of Southern food. It’s not all fried chicken.

“Savannah’s connection to its English and Scottish past is evident in much of the cuisine,” Card said. “Guests are always surprised to find that Savannah has so many Scottish and English dishes.”

At The Little Crown by Pie Society, a British pie house and Georgia’s smallest pub, the tour group squeezes into the 200-square-foot space and noshes on sausage rolls, piquant bites of sausage enveloped in a cocoon of flaky butter crust pastry, just like our forebearers did.

The 22 Square Restaurant & Bar inside the Andaz Savannah hotel offers more traditional coastal Southern fare like the ubiquitous shrimp and grits. Once the humble breakfast of laborers and fishermen, today it’s a menu superstar at upscale restaurants. This version, made with locally grown, stone-ground white grits, is topped with pork belly.

Next stop on the three-hour tour is the American Prohibition Museum. It’s hard to believe there was ever a time when it was hard to get a drink in Savannah, but this museum is proof that even this fun-loving city succumbed to the 18th amendment (1920-1933) — except when it didn’t.

Congress Street Up, the museum speakeasy, serves Chatham artillery punch, an iconic drink named for Georgia’s first colonial artillery militia. Be warned, this potent concoction of rum, brandy, bourbon and Champagne mixed with lemon and sugar has been called “the vanquisher of men.”

The she-crab soup is a favorite delicacy at 82 Queen. Courtesy of Bulldog Tours 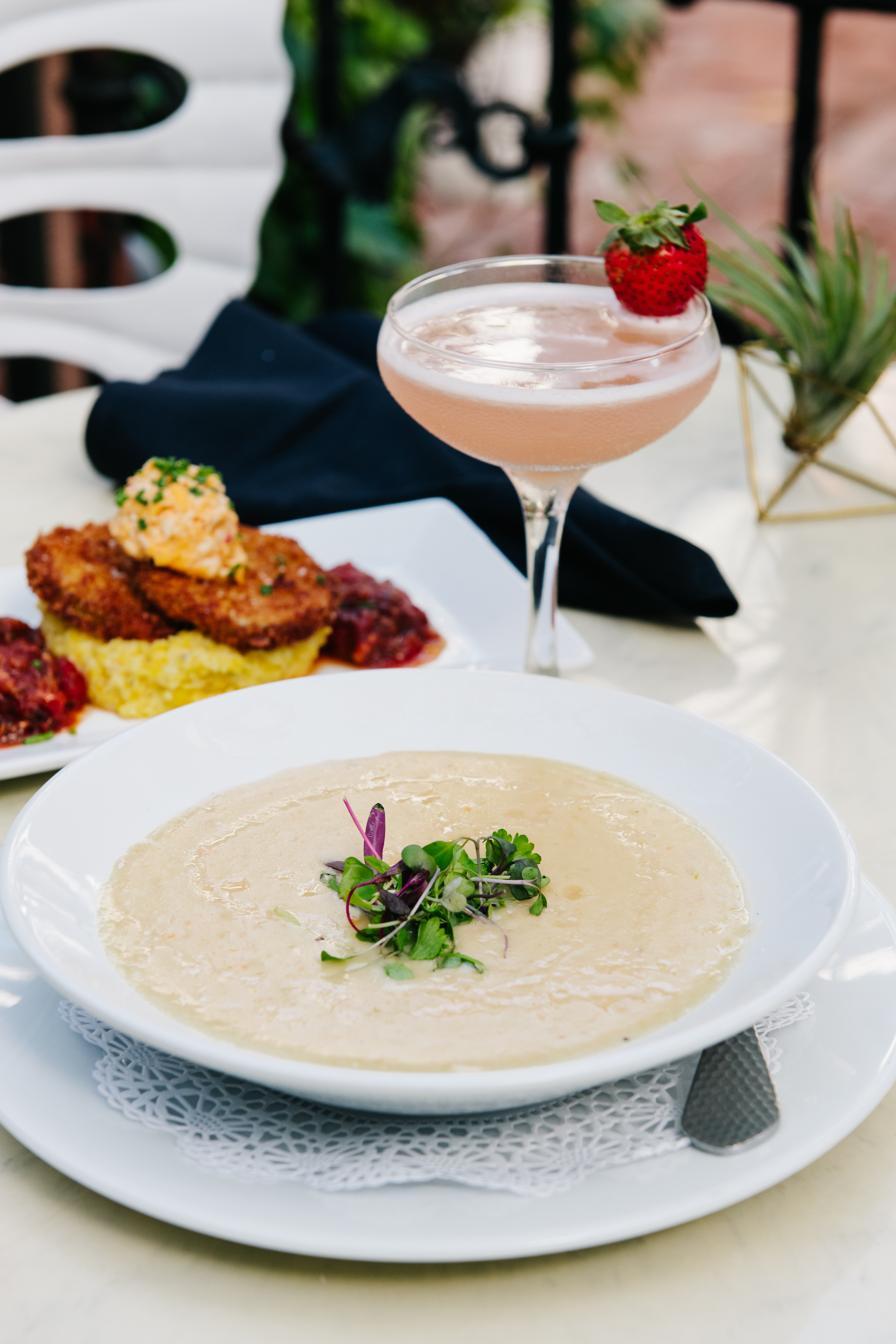 The she-crab soup is a favorite delicacy at 82 Queen. Courtesy of Bulldog Tours

When it comes to Southern food, Charleston sets the bar. Award-winning chefs and restaurants are as prolific as the church steeples that give the port city its nickname, the Holy City.

If you don’t know where to start your culinary journey, book Bulldog Tours’ Savor the Flavors of Charleston Tour that showcases the best of Lowcountry cuisine.

A favorite stop on the 2.5-hour walking tour is 82 Queen. This fine dining establishment located in a restored antebellum home with a charming courtyard is famous for she-crab soup, a staple of Charleston’s culinary landscape. The creamy, sherry-drizzled soup is made with fresh local crab and roe from Crosby’s Seafood.

John LaVerne, owner of Bulldog Tours, says that when the farm-to-table movement became popular in the early 2000s, Charlestonians had a good laugh. Was there any other way to eat? Fresh seafood is available year-round, and fruits and vegetables thrive 10 months of the year here.

“It’s a big reason we are such a successful foodie town,” LaVerne said.

Carolina Gold rice was the Lowcountry’s major cash crop during the colonial and antebellum eras. Charleston became one of the wealthiest cities in the country in large part because of the skillful cultivation of rice by enslaved Africans. Diners can taste the sweet, nubby delight in the rice-stuffed peppadew pepper served at Well Hung Vineyard.

Charleston is famous for seafood, but it’s also a smokin’ hot barbecue destination. Samples of pulled pork are devoured at Poogan’s Smokehouse. They cook it low and slow. To eat like a local, drizzle the meat with mustard-based barbecue sauce.

ExploreStill want a taste of the city without leaving home? Join a virtual food tour 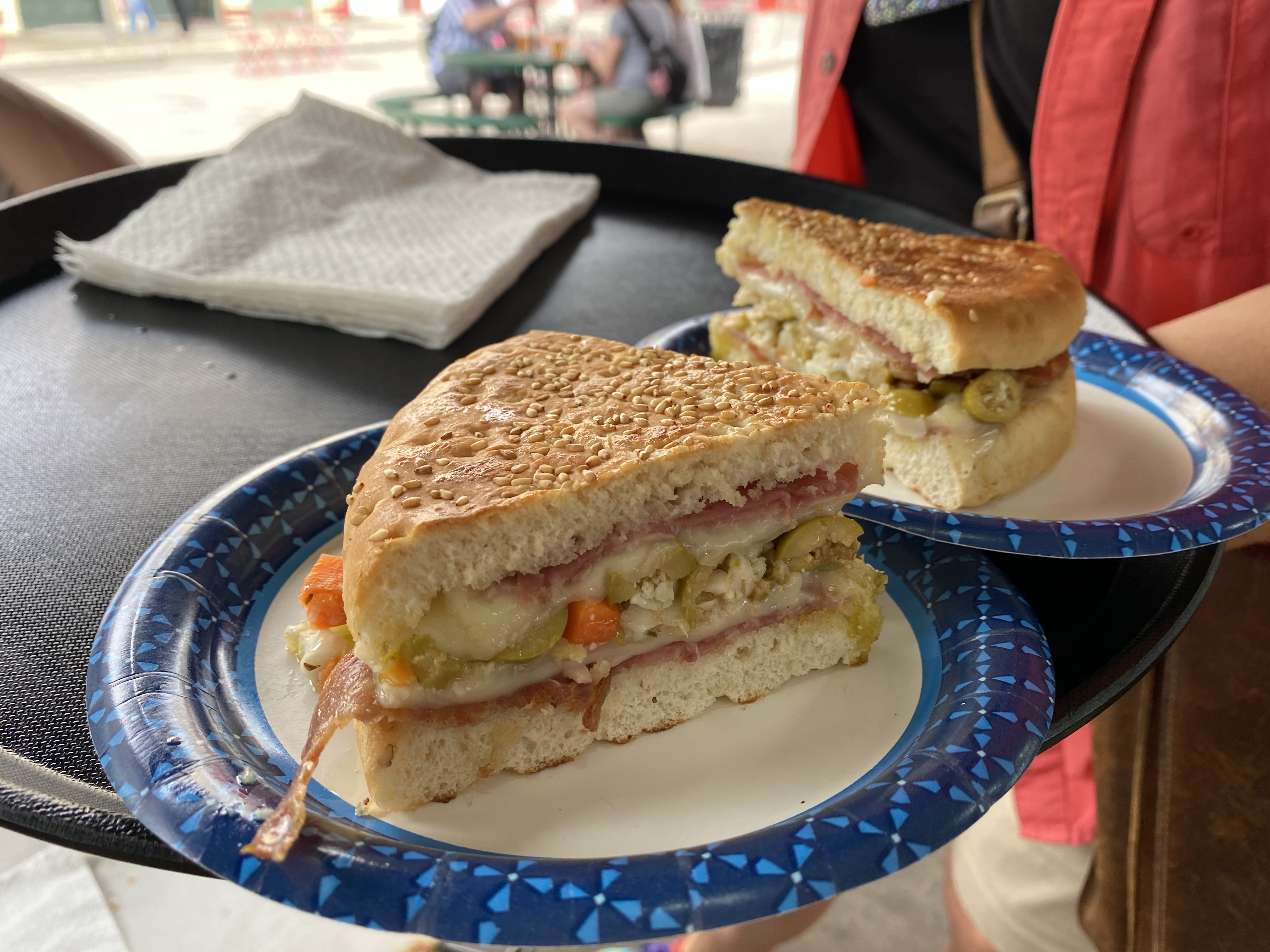 New Orleans arguably has the most distinctive cuisine in the South. Like the city itself, the food has an inimitable bon vivant spirit.

Destination Kitchen’s three-hour Walking Tour of the French Quarter illustrates how myriad ethnicities — including French, African, Spanish and Italian — contributed to the culinary roots of this unique food culture.

At Alberto’s Cheese and Wine Bistro, determined epicureans try to get their mouths around a thick-as-the-Bible muffuletta. What makes this sandwich special is the zesty olive salad that’s stuffed between layers of cheese, salami, spicy Portuguese chorizo sausage and mortadella, a pork-based Italian lunch meat. It’s all held together by Sicilian sesame bread.

The sandwich was invented in 1906 by Salvatore Lupo, a Sicilian immigrant who owned the Central Grocery Co. on Decatur Street.

As the tour strolls along the ancient cobblestone streets of the French Quarter, some pause to catch the sound of buskers playing jazz, the music that made the city famous, and admire historic buildings with graceful wrought iron balconies.

At N’awlins Café & Spice Emporium, bewildered diners learn that thing on a stick isn’t a corndog. It’s boudin, a Cajun delicacy that’s a combination of pork, rice and seasonings stuffed into a sausage casing.

It wouldn’t be a New Orleans food tour without gumbo, a roux-based stew that’s practically sacred in Louisiana. At New Orleans Creole Cookery, folks dig into a rich rendition with chicken and andouille sausage, but it’s often made with seafood, too.

Sign up for the AJC Food and Dining Newsletter

Fri Jul 22 , 2022
If you’ve ever fought for chicken nuggets, you’ll recognize this scene — hands going everywhere in a torrent of frenetic energy the moment a paper takeout container filled with a pile of golden brown nugs arrives. That’s because there are never enough nuggets for the number of people, especially when the chicken bites […]