When Lynn del Carmen just couldn’t find the Asian foods she wanted in Chattanooga, she didn’t try shopping new stores – she opened her own.

She and her husband, Dr. Alex del Carmen, launched Asian Food & Gifts of Chattanooga in 1981, eight years after they’d emigrated from Laos.

“It was impossible to get Asian ingredients,” says Paul del Carmen, 58, who took over the store when his mother retired in 2014. “My mother was depending on her sister to mail [ingredients] from San Francisco, so she decided to start an Asian grocery and import for herself.

“That,” he recalls, “was the beginning in this beloved business of hers.”

Paul del Carmen says his parents originally settled in Ohio, but “the weather was too cold.” They chose Chattanooga when his father, a surgeon, got an offer from a local hospital.

Del Carmen says his father, who died in 2016, continued his practice, but helped out at the store when he could.

“He’d tell me, ‘Paul, I can do surgery for three straight days and nights, no problem, but helping your mother in the store for a single day is stressful,'” del Carmen says with a laugh.

Del Carmen says he helped out at the store after school and on weekends growing up. He started his college education at the University of Tennessee at Chattanooga, but soon thereafter moved to San Francisco. He’d been there about four years, working as well as studying, when his father called.

“He said mom wanted to retire,” he recalls. “I really enjoyed what I had in California. I was going to school and doing bookkeeping for a law firm, but they needed me, so I knew I needed to be there.”

When del Carmen returned, he did more than just help his parents with the store. Under the same roof, he opened his own businesses – first a travel agency, then an insurance agency.

Del Carmen says he juggled the family business and his own ventures for a couple of years until his mother – years after she’d said she was ready to retire – ceded control of the store to him.

He started by closing his travel and insurance businesses and taking down the interior walls that had separated his space from the store’s.

“I’d been talking to customers, and they were telling me we needed to expand,” he says. “The frozen capacity was quite limited, so we cleared that room for additional inventory.”

Del Carmen says that today, the store is much more about Asian food than gifts.

“I want to continue what my parents did for more than 30 years – maintain friendly, quality service and bring in more selection. I try to give the community what it’s looking for,” he says.

Del Carmen says he finds himself doing something else his mother did.

“She couldn’t stay away” after she finally retired, he says. “I’d come in, and she’d arrive a half-hour later. She didn’t know what else to do. She loved to check with everyone who walked in – customers, family, good friends.

“I see that now, why she couldn’t stay home. My wife complains that I come to the store on my day off, but it’s a seven-day [commitment] for me, too,” he says.

Del Carmen says keeping the business in the family is a wait-and-see proposition. He says his daughter, Eliza, lives in Atlanta, where she’s enrolled at the Emory University School of Law, but has online access and helps with invoicing and related tasks. Del Carmen adds that his son, 21-year-old Evan, comes into the store three or four times a week, as his Emory online class schedule allows.

“I want them to enjoy whatever they’re doing,” del Carmen says.

Sun Jun 6 , 2021
A property developer turned popular food blogger has set himself a challenge to eat at every restaurant in Balham to support its businesses post-lockdown. Stephen France, 55, a Balham resident for over 30 years, deeply missed dining out during lockdown, and after discovering his neighbourhood’s thriving restaurant scene decided to […] 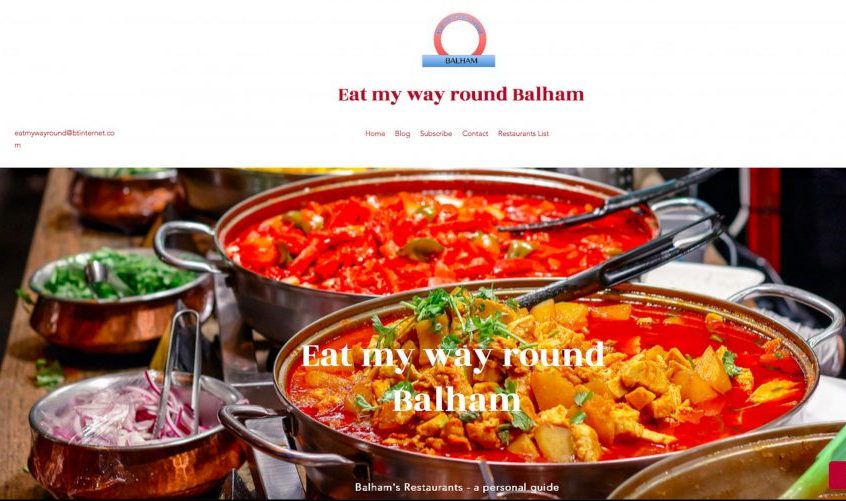