Skip to content
Those are just some of the tantalizing and tasty offers that made headlines this week in the fast food world. Companies in that crowded space operate on razor-thin profit margins, so they are constantly trying to gain an edge over its competitors, often with perks like free food or other giveaways.

Americans have lost their minds over the Popeyes’ fried chicken sandwich for the past two years. Soon, our friends in the United Kingdom can experience the clucking craze.

The chain unveiled plans to open its first UK restaurant later this year, following successful launches in Spain and Switzerland, as it accelerates its expansion outside of the United States. It declined to comment on the exact timing or location of its UK debut but said it’s targeting 350 restaurants in the country over the next decade.

Chipotle announced this week that it’s opening its first Canadian restaurant in nearly three years. The location, in British Columbia, is part of a broader northern expansion with plans to open eight new outposts over the next year.

Currently, Chipotle (CMG) has 23 restaurants in Canada, primarily in areas around Toronto and Vancouver. The company said it believes there’s a “massive growth opportunity” in the country.

Krispy Kreme regularly comes up with ways to give away free doughnut. This week, it sweetened the offer to those who get vaccinated against Covid-19.
Now through the end of the year, if you take your vaccination card to any Krispy Kreme US location, you can get a free glazed doughnut every day, the company said.

The card must show one or two shots of any of the Covid-19 vaccines to qualify, and it must be redeemed at a store. You don’t need to buy anything to get your daily free doughnut.

Paying $9.99 a month for a streaming service is so last year. You can use that money instead for a membership at Insomnia Cookies with its new “CookieMagic” program.

Members get one free in-store cookie every day as well as other perks including free local delivery, 20% off nationwide shipping orders and “sneak peek tastes of new cookies and menu items,” the company said.

The average price of an Insomnia cookie is $2.50, so the program pays for itself quickly. The trendy chain has about 200 US locations.

Taco Bell announced this week that that it is expanding its “Go Mobile” restaurant remodel nationwide, with its dual drive-thrus and smaller dining rooms, and plans to add at least 30 locations by the end of 2021. The chain debuted the design last year in response to the pandemic, which changed fast food customers’ habits — perhaps permanently.

The restaurants also have curbside service for contactless pickups and “bellhops”— masked employees stationed outside taking customers’ orders on digital tablets. Up to 1,000 bellhops will be hired by the summer, Taco Bell said.

Thu Apr 1 , 2021
A restaurant owner in Palm Desert is opening up about an anti-Asian verbal attack she and her staff received from a group of female customers.Stella Kim encountered the racist customers who came late Monday night to Musashi on Highway 111, one of the two restaurants she owned, reports KESQ.   […] 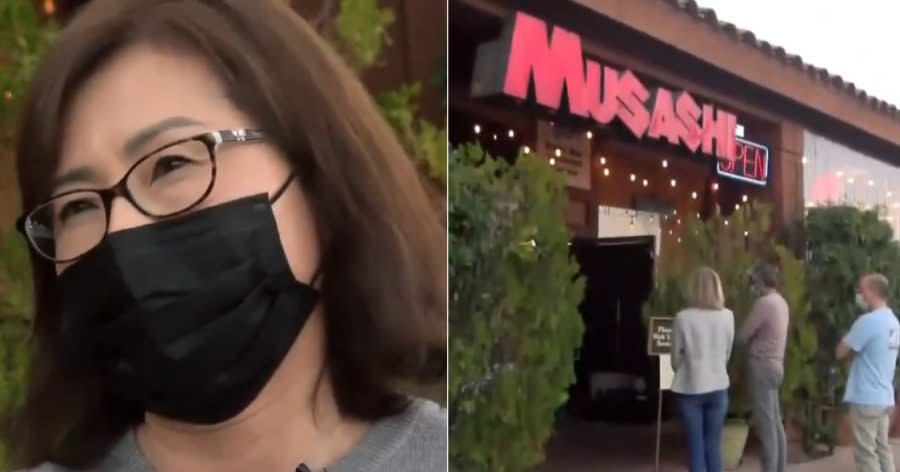