Johann Schuster, former executive chef and owner of Midtown restuarant Charivari, which closed in 2018 despite a fair share of fans for his scratch-made, Romanian cuisine, is back. At the time of Charivari’s closing, Schuster was also one of only a handful of chefs who were proponents of concepts such as in-house, whole-animal butchery and reducing food waste by using every part of the animal.

Upon closing Charivari, Schuster thought his next move was to open a new restaurant with a smaller and more financially manageable footprint. Those plans fell through. “I had the location and everything,” he said. “We started to build out and then the landlord started pressuring us. First, he said he’d give us a year to open. Then, he reduced it to eight months. I wasn’t prepared financially to move that quickly — and maybe mentally. I don’t know. It’s hard to say. It was also hard at the time to find a bank to support [the restaurant build-out]. I didn’t want to go to investors, and the rent was going to be high. That’s on top of overhead and employees. So I just let it go.”

Chefs who close their restaurants might turn to restaurant consulting. Instead, Schuster took a break, driving for rideshare services and taking on the occasional catering gig. “It wasn’t as stressful [as running a restaurant]. I had more time for my family, including my teenage daughter. It was a good thing to be at home more.” The reduced stress was a refreshing change of pace — but he couldn’t stay away from a kitchen permanently, especially once his daughter entered college. Schuster needed new outlets to do what he loved best: make people happy with his food.

While running Charivari, Schuster found a friend in Pablo Valqui. At the time, Valqui, the offspring of Peruvian and German parents, was the gourmet foods buyer at the Spec’s flagship store just across the street. With ingredients from across the world at his fingertips thanks to the stores extensive deli and wine departments, it was easy for Valqui to team up with Schuster to showcase delicacies. Dinners featuring white asparagus, for example, became annual occasions.

Like Schuster, Valqui would make a job change and move on, representing Peruvian pisco for a time. Then, Valqui drew upon his world-traveler background and opened a company called Gourmet Tours Worldwide. He started organizing culinary tours and taking groups to restaurants and wineries in Peru, Germany, Mexico and other countries. (In addition, he also works closely with Newsom Vineyards in Comfort, Texas.)

It wasn’t too long before Schuster and Valqui reconnected, and Valqui started helping market and coordinate pop-up dinners — an outlet for Schuster’s passion for cooking, and an opportunity for his old fans from Chariviari to again experience his cuisine. (The next one will be in mid-August at the Empty Glass, a wine bar located in Tomball, and another planned for Mademoiselle Louise, a French café at 1725 Main in downtown Houston. Details on both are still being finalized, so interested parties should send an email to request further information and be put on the reservation list.)

These collaborations led the two friends to decide that Schuster should help plan the culinary tours for countries where he had contacts and familiarity — and cook at least one dinner on the tour himself. Sadly, Valqui temporarily halted the tours to Peru due to political unrest — but Schuster had a plan B. “I said, ‘Okay, that’s fine — then we go to Romania!”

Schuster left Romania in 1985, when it was still a communist country. He captured this experiences in his book, “A Bone and H20: One Chef’s Journey With Food“. The name comes from the resourceful techniques he used as a military cook. “One night before Christmas, the battalion general brought in a whole cow. He said, ‘I need four packages of meat from this cow. Do what you want from the rest of it for the soldiers.’ I stretched what was left. Me and three other chefs made meatloaf — which you can stretch further with potatoes, carrots and parsnips. I blanched the bones and made soup, then I split the bones in half and extracted the bone marrow for bone marrow balls. So, we had consomme with bone marrow balls,” said Schuster. Rounding out that resourceful dinner was apple strudel, made with the company stash of canned apples.

With the help of an attorney, who was one of his best customers where he worked at the time (Park Restaurant in Frankfurt, Germany) Schuster made his way to the United States. “I initially thought I’d go to Anaheim, California, where I had an uncle. After he [his uncle] passed away from a heart attack, this guy — my neighbor — said, ‘Hey, go to Houston! Go to Texas! You’re always talking about cowboys. Go be a cowboy!’ So here I am. I loved Houston since the beginning. I love the culture and the people. It’s a very metropolitan city, and you can find everything here. The weather’s crazy, but it’s okay. We have air conditioning.”

He and Valqui have not one, but two culinary tours planned now for his native country: one from September 22 to October 3 and another with the same itinerary from October 6 to 17. Schuster is hoping to get an audition for the Romanian chef competition show, Chefi la Cuțite. In English, the name translates to Chefs With Knives. “You have to prepare one meal in one hour for three master chefs,” he explained. “They don’t know who made which dish. Just like we did at Charivari, the food is served in a cloche. They just open it and enjoy the food — or maybe they don’t!” Judges award their individual knives to the chef whose meal they preferred; a chef has to win at least two to go on to the next round. If Schuster does indeed make it onto the show during a tour, he plans to take the entire tour group so they can be part of the studio audience.

According to Valqui, the tour starts in Romania’s capital, Bucharest, and other planned stops are Dracula’s Castle, Brașov and Sibiu. The tour ends in Vienna. Schuster will cook two meals during the trip, including one at a restaurant where he was employed as a young man. “The area has very good wine, very good food and people of several different cultures, all living in peace,” said Schuster.

After Romania, Schuster has his sights set on Japan. “I’m a very big fan of Japanese culture and food — as well as how they handle food. It’s very respectful and a totally different approach.” In 2008, Schuster says he traveled to Japan at the invitation of its agency for cultural affairs after he created a Wagyu Beef Ice Cream. (Sound strange? Here’s a description from a TripAdvisor review by one of his Charivari customers: Then, onto dessert, [which] was wagyu beef cracklings made into ice cream, perhaps the most intense and rich ice cream I’ve ever had, topped with a tiny sliver of the raw, buttery grade A5 Wagyu.”)

He’s also interested in co-leading a tour to Australia. He’s looking forward to cooking kangaroo. “It has lower cholesterol than chicken and no antibiotics. They grow there like rabbits.”

People interested in Valqui and Schuster’s culinary tours can visit the Gourmet Tours Worldwide website, or send an email.

Did you get value from this article? We rely on our readers and sponsors to cover expenses each month, such as writer and social media fees, administrative costs, web development, software, online services, website hosting and more. Can you chip in just $5 a month to keep our coverage going? (Not tax deductible.) Thanks in advance for supporting local journalism! To become a sponsoring business and advertise on Houston Food Finder, email us.

Why No One Should Invest in Food Delivery Stocks in 2021 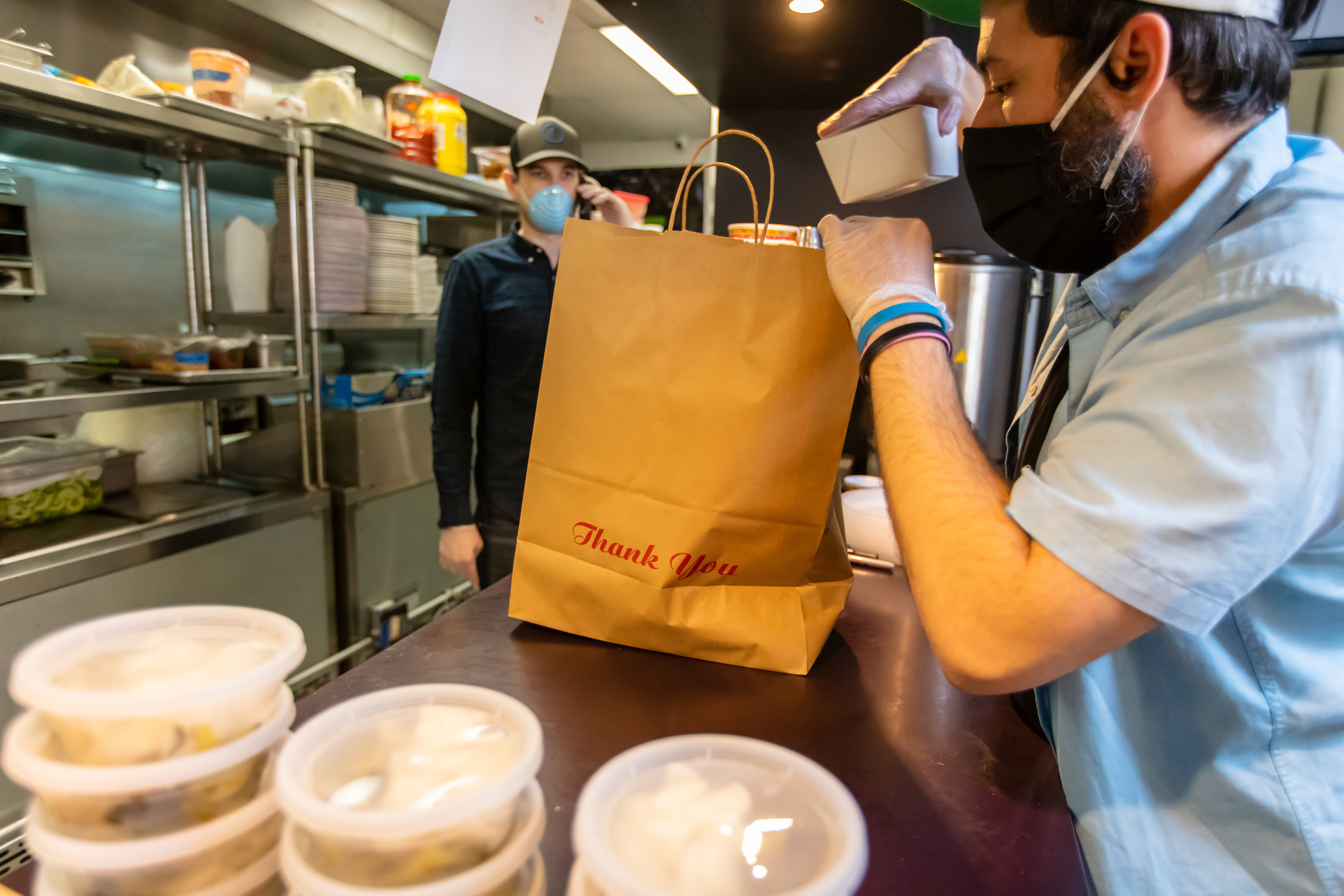