Kang Lee has absolutely no idea what TikTok is. What he does know is that his grandson posted some sort of social media video of the sushi restaurant he’s owned for 14 years in downtown Dallas, and now he has more business than he knows what to do with.

While visiting his grandparents in Dallas in March, Minnesota high school senior Andrew Kim saw how dire the situation was at their restaurant. Sushiya, a small Japanese spot along Elm Street that once bustled with workday lunch crowds and weekend diners, was empty on a Friday night, and it had been that way for more than a year.

“It was really sad because you look up to your grandparents, and to see them struggle is really disheartening,” Kim said.

His grandfather immigrated to America from South Korea in the 1960s and opened one of the first Korean markets in Dallas in the ’70s. Since then, he’s owned and operated a handful of Dallas restaurants. Sushiya, which has been a constant in Dallas’ downtown for over a decade, is the closing act for Lee’s 50-year restaurant career, and it gutted Kim to see it empty.

He looked around the unoccupied tables and knew what it meant for his grandfather, who is almost 80 years old and was hoping to retire in the next year to fully devote his time to care for his ailing wife. Mounting bills and a chronically vacant dining room were pushing that hope further out of reach.

Kim decided to throw a Gen Z Hail Mary and made a TikTok video asking people to come support his grandfather’s struggling restaurant. In the 15-second video, scenes flash by of Kim with his grandfather and waving restaurant staff, an upbeat trending song playing over it. He didn’t think much would come of it, but within hours of the video posting, the likes and comments started to pour in. To date, it has been watched nearly 6 million times and has 2 million likes.

Commenter after commenter said they were going to go eat at Sushiya and bring friends. Some people joked that they were buying flights to Dallas just to go see Kim’s grandfather. But something unexpected, at least to Kim and Lee, happened. People, and lots of them, really did show up.

“I couldn’t believe it,” Lee said. “People were lined up at the door!”

The day after Kim posted the video, Sushiya was packed. Lee and his reduced staff couldn’t keep up. They had so many customers that at one point they had to stop taking to-go orders and turn some people away at the door. Lee worried about how customers would handle the unusually slow service and long wait times as they tried to accommodate the rush of new business, but everyone was understanding and patient.

“It’s been a different crowd than we’re used to,” said staff member Junok Kim, known to regulars as Mama Kim. “It’s groups of people coming in and a lot of young people, but everyone is so kind and so nice.”

She has worked with Lee for 30 years at the various restaurants he’s owned. She keeps everything running smoothly from the front of the house to the sushi bar when the sushi chef is out, as he’s been in recent days due to an injury.

Sushiya’s traffic first came to a sputter early last year as some people began to avoid Asian restaurants due to baseless fears of the spreading virus that originated in Wuhan, China. Then the March 2020 shutdowns happened, and Mama Kim said business never came back. Downtown Dallas was empty, and so was their dining room.

“Things didn’t pick up for a year until this whole TikTok thing,” she said.

Lee had to let go of several staff members when business became unsustainably slow, but once the video went viral on TikTok, he was able to (and needed to) rehire all of his employees. He wasn’t sure if the surge in business would fizzle out as quickly as fleeting viral fame, but day after day, the customers keep coming in surprisingly large numbers. Many of the people who come in ask to take photos with him, which he finds hilarious and gladly obliges.

Since his grandson shared the video on TikTok, Sushiya went from a year straight of 50% revenue back up to 95%, Lee said. He still has debt to pay off that he amassed over the past year in order to stay open, but he’s not worried. He’s managed to stay in business this long, and with the boost from whatever internet magic his grandson seemed to have worked, he feels hopeful that the restaurant will survive and retirement will soon be within reach.

What Does Asian Food Mean to America? A National Smithsonian Series Will Talk It Out.

Sat Apr 24 , 2021
One of the more striking images to emerge from the rallies and protests that arose after a white man killed six women of Asian descent during attacks on Atlanta-area spas last month was the slogan “Love Us Like You Love Our Food” painted onto picket signs. In a four-part series […] 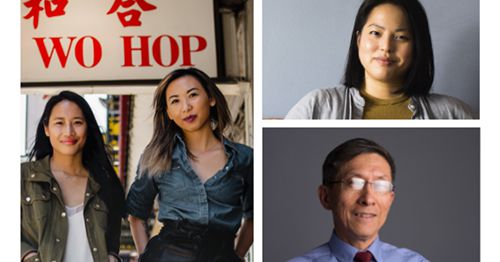