One of the public policy initiatives designed to help restaurant survive the past year, “cocktails to go” is now getting a second look from restaurants, industry leaders, and legislators as they all contemplate post-pandemic regulatory realities.

Allowing licensed restaurants the opportunity to sell beer, wine, and mixed drinks as part of pick-up or to-go orders was originally promoted as a way to help restaurants survive lockdown. Beverage alcohol take-out offered a way to book additional revenue with little additional cost, and it was an option of which nearly every licensed eatery took advantage.

Now that pandemic-related business restrictions have been relaxed, many in the industry are lobbying to make cocktails-to-go permanent.

A number of states have already extended the right for licensed restaurants to sell alcohol with food to-go, and here in Massachusetts similar proposals are being discussed.

Other jurisdictions, such as New York State and Pennsylvania, have ended the practice, much to the dismay of restaurants in those states.

Are cocktails to-go a good idea that deserves to be made permanent? The answer to that question depends on who you ask.

Restaurants like the idea as a way to boost revenue. The brewers, wine companies, importers, and distributors are mostly indifferent, since who handles the consumer-facing sale of their products isn’t likely to have a big impact on their overall sales volume.

Retail package stores, on the other hand, are opposed to this new source of competition.

Selling beverage alcohol, however, imposes significant responsibility and legal liability on anyone who serves or sells it. Thus to-go alcohol sales could easily become an operational headache for restaurant owners at a time when they are beset with other challenges.

Miso Robotics, the high-tech startup that developed “Flippy,” the robot grill cook, has recently debuted an automated beverage dispenser for restaurant use.

The beverage unit, which interfaces with a food outlet’s point-of-sale system, automatically dispenses cold drink products and the ice to chill them as drinks are ordered, capping each individual cup with an airtight, leak-resistant seal rather than the conventional snap-on lid. The dispenser’s conveyor system sequences the sealed drinks and positions them for quick access by counter service staff.

A short video showing the new beverage system in operation can be viewed at misorobotics.com/products/automated-beverage-system/

Dunkin’ locations are offering coffee lovers the chance to try a new flavor experience. Through August 17 participating locations will be stocking a smoked vanilla syrup that will be used to create two limited-time beverage offerings, a Smoked Vanilla Cold Brew and a Smoked Vanilla Latte. The cold brew option will be further enhanced with “sweet cold foam,” a topping of non-fat milk, cream, and sugar that is becoming a permanent Dunkin’ menu option.

One consequence of the staffing problems restaurants are experiencing is an inability to gear up their operations as customer traffic returns.

In a recent social media posting the Steaming Tender Restaurant in Palmer revealed they won’t be able to expand their operating schedule to include Wednesdays until they can fill more key kitchen and dining room positions.

In Berkshire County, where the “high season” for that region’s cultural tourism begins in early July, Mezze Bistro + Bar in Williamstown has announced they’ve yet not been able to fully staff up for the summer, so they are temporarily “truncating” their operating schedule to four nights only, Thursday through Sunday.

Wendy’s Restaurants are doing their best to heat things up this summer. Starting July 12 participating locations will be stocking a new “Ghost Pepper Ranch” dipping sauce that can be ordered along with a number of menu items.

The burger reportedly has a high voltage flavor profile, thanks to a special seasonings blend as well as toppings that include chipotle sauce and jalapeno slices.

In pre-pandemic days the Delaney House in Holyoke put on a successful series of beverage sampling events in the form of its monthly “Drink Like a Pro” dinners.

Pandemic restrictions have meant that events program has been put on hold, but the Delaney House management team has reinvented the experience as a “pick up and carry out” option.

In conjunction with their Delaney’s Market affiliate, the Delaney House has created four-course Drink Like a Pro packages. The second of these is planned for July 17, with a four-course dinner and matching wines.

The package’s first course is a summer salad with fresh berries; a citrus-infused shrimp skewer follows. The main dish for the dinner is roasted red pepper brie chicken, and a Key Lime cake is provided for dessert.

Each dinner-for-two package includes four ready-to-finish-at-home dishes and a 187 ml bottle of featured wine to go with each course. Video instructions are also available to help with the finishing of the meal.

Drink Like a Pro packages need to be reserved at one of the three Delaney’s Market locations; the deadline for doing so is July 14 at 7 p.m. The package is priced at $99 and will be available for pickup on July 17 from 10 a.m. to 6 p.m.

More information is available at delaneysmarket.com.

The Table 3 Restaurant Group in Sturbridge has announced that the Cedar Street Grille in Sturbridge will be resuming their Global Tapas Dinner series starting in August. Each dinner focuses on regional flavor traditions from throughout the world; when possible, locally source ingredients are used. Each dinner also begins with a signature cocktail experience.

The first dinner in the 2021 series, which will be held on August 3, will focus on traditional Spanish tapas. A subsequent event on September 21 will be themed around what’s available on the regional farmers’ market scene.

Pricing for the Global Tapas events is $65 per person, not including tax or gratuity. Reservations can be made by calling (508) 347-5800.

Chicago-based McDonald’s Corp. has announced that it is taking its MyMcDonald’s Rewards loyalty program nationwide as of July 8. The program awards members with 100 points for every dollar spent; the points can be redeemed for free items in future visits. Point redemption is on a tiered basis, with certain point total thresholds required for various items. A “Medium Fries,” for example, requires 3000 points, while a free Big Mac is available to those who have acquired 6000 or more loyalty points.

The MyMcDonald’s Rewards program is exclusively accessed through the chain’s smartphone app.

Champney’s Restaurant at the Deerfield Inn in Deerfield will be hosting another “Food & Wine & Jazz” evening on Friday, July 16 from 6 p.m. until 8 p.m.

The evening incorporates four flights of wines for participants to sample along with substantial hors d’oeuvres selections designed to harmonize with the vintages being served.

Masse’s American Bistro in Chicopee has announced new hours. The restaurant, which specializes in fresh seafood, will be operating Tuesday through Saturday from 11 a.m. to 9 p.m.

The restaurant is promoting “Appy” House Specials on Tuesday, Wednesday, and Thursday from 4 p.m. to 6 p.m. Options available include clams and oysters on the half shell, a lump crab cake, Old Bay-seasoned cod tenders, and truffle parmesan fries.

The new White Lion Taproom in Tower Square has announce that it has retained Springfield native Andrew Brow to oversee the Taproom’s food offerings.

Hugh Robert is a faculty member in Holyoke Community College’s hospitality and culinary arts program and has nearly 45 years of restaurant and educational experience. Robert can be reached online at [email protected].

Tue Jul 6 , 2021
by Sara Hayden “Trust me….I eat a lot.” Owner Nee Lau keeps a slow and steady emphasis on quality above all else. Whole rock cod in spicy black bean sauce at The Mandarin in Menlo Park. The restaurant had a soft opening in June, with plans for a grand opening […] 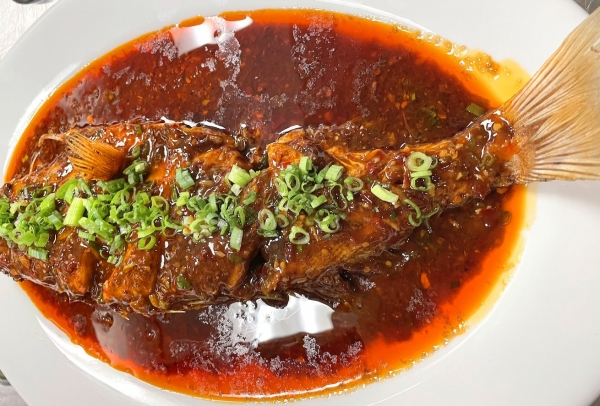