“I thought you know he was funny, he had like good content on his show,” she told TODAY Food. But that feeling shifted changed last year when she watched an old segment from the show called “Spill Your Guts or Fill Your Guts.”

In the recurring segment, Corden presents his celebrity guests with foods he calls “gross” or “horrific” in the description. But Saira saw one clip and was horrified.

“I noticed that one of the foods that he presented to someone was balut (a fertilized duck egg that is boiled and eaten from the shell), and balut is like, very specific to Filipino culture,” she explained. “It’s a food that I have been eating whenever I go to the Philippines with my grandma and my cousins, so it’s a very sentimental food to me, and I noticed that he was presenting it to a guest and calling it gross.”

“I was just so confused and I feel like it was a moment of me just being like, ‘Oh my gosh, like, this is my culture. I don’t understand why he’s making fun of it?'”

The specific clip, which appears to have originally aired in 2016 and has over 27 million views on YouTube, shows Corden and fellow TV personality Jimmy Kimmel asking each other difficult questions. The two TV hosts were clearly unexcited to eat several other common Asian foods in the segment like the thousand-year egg and chicken feet.

Saira said she was so offended she stopped watching the show. Saira said she didn’t exactly dwell on it until she was reminded of the segment this week and made a now-viral TikTok about it on Monday.

“they’re calling Asian food disgusting on live tv,” Saira wrote on her video. “huh. this is literally racist. this is so disrespectful wtf.”

After her video took off, she said she started getting direct messages from people who wanted to do something. Later that day, she shared a Change.org petition, calling on Corden to “completely change the food presented on his show” or “remove the segment entirely,” issue a “formal apology” on his show and make a donation to support “Asian-owned restaurants and small businesses.”

Besides balut in the September 2016 video, Corden has done several other “Spill Your Guts” segments with his guests. In March, for example, he presented model and cookbook author Chrissy Teigen with a beet worm salad. Teigen appeared to be nonplussed.

“I’ll eat the worm, it’s the beet that gets me,” she said, casually grabbing one of the worms and munching on it.

“James freaking out over Chrissy eating the worm … she’s half Thai, she’s gone to street markets, it’s quite common for South East Asian street markets to sell fried insects,” one person noted in the YouTube comments.

After her TikTok video began picking up steam, Saira said she created the Change.org petition in an attempt to get a response from CBS or Corden himself.

“In the wake of the constant Asian hate crimes that have continuously been occurring, not only is this segment incredibly culturally offensive and insensitive, but it also encourages anti-Asian racism,” she wrote in the petition. “So many Asian Americans are consistently bullied and mocked for their native foods, and this segment amplifies and encourages it.”

TODAY reached out to both CBS and Corden’s representatives but did not hear back.

As of Thursday afternoon, Saira had more than 10,000 signatures of support. She said she hopes the petition will inspire change.

Saira added that the foods of BIPOC cultures are often appropriated, which made the segment sting more.

“I think in this segment, our foods are used for profit, because it’s obviously making them money,” she explained. “And I think that’s not right … to make like a mayo and chicken sandwich could be gross to someone else. But that isn’t rooted in a BIPOC culture, where BIPOC cultures are constantly for years profited and exploited.”

She added that it’s especially harmful, since many of the celebrities Corden interviewed for the segment, including Kim Kardashian, Gordon Ramsay and Justin Bieber, have large fan bases of young people who could be influenced by the show.

“It just hurts a lot to see someone with that much fame and that much power, you know, making fun of our foods or mocking them, because it is special to us and I think that this also perpetuates anti-Asian crimes and bullying, like in schools,” she said.

Mon Jun 14 , 2021
New art inside Vinbero. Kali and Kris Kelnero sat with Strom Peterson at a table outside the Vinbero wine bar in the former Cheesemonger’s Table space in downtown Edmonds. I noticed a sign that gave me hope they’d soon be open. I circled back and was able to speak […] 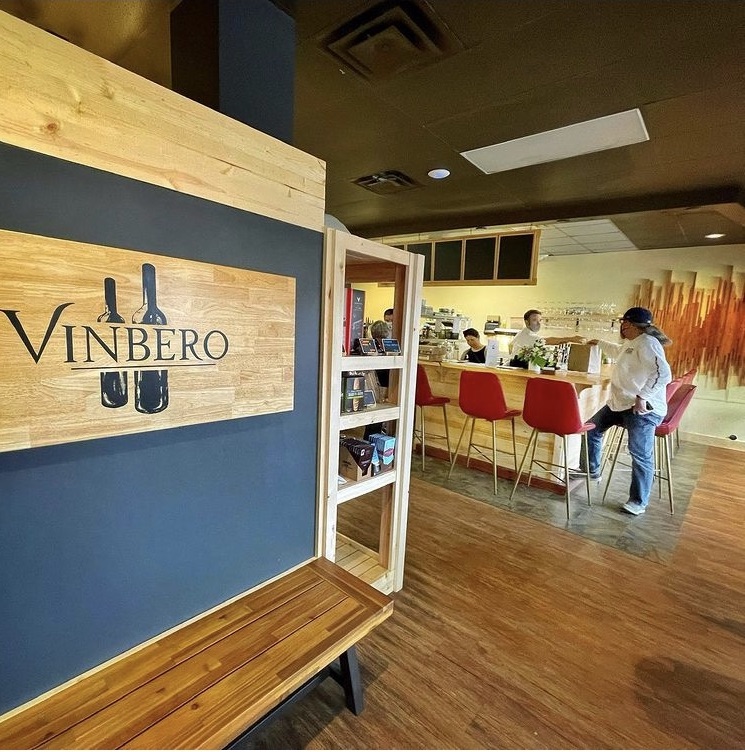