The House will vote on the Senate-passed version of the new relief measure as soon as Monday, putting it on pace for President Biden to sign it into law by the end of the week.

Lawmakers snubbed a wide array of businesses pleading for help from Washington. Gym operators and long-term senior care facilities are among those arguing Congress has left them facing further closures and layoffs even as the broader economic outlook brightens.

“When you see restaurants continuing to get financial relief, and yet those on the front lines of caring for the most vulnerable in this crisis are left out, I struggle with that,” said James Balda, president of Argentum, an association representing companies that run senior-living facilities. His group unsuccessfully pushed for $5 billion in federal aid for the sector.

“The hope is by spring and early summer, things will have started to normalize, so businesses won’t need a ton more aid,” said Marc Goldwein, senior vice president of the Committee for a Responsible Federal Budget. The bill, he said, “reflects a shift toward focusing on making sure households and state and local governments are in good shape, rather than specific industries or the business sector broadly.”

Against that backdrop, the handful of interests that secured billions of dollars in new funding stand out.

The restaurant industry emerged as the bill’s biggest private-sector winner. The package establishes a $28.6 billion “revitalization fund” for restaurants that will dole out grants to help them cover pandemic-related revenue losses, with businesses eligible for up to $5 million each.

Sean Kennedy, the National Restaurant Association’s vice president for public affairs, called the fund the “the culmination of a one-year effort” to secure a dedicated pot of money for the sector. But it has racked up a series of smaller lobbying victories in pandemic relief measures, including a carve-out in the Payroll Protection Program that granted restaurants a higher loan limit than other businesses.

In the latest bill, the restaurant group helped push for the expansion of a tax credit for companies that keep workers on their payrolls. And they lobbied against a federal minimum wage increase many Democrats wanted to include, endorsing the package once they were confident it would not include such a hike or end the tipped minimum wage.

The restaurant lobby activated its nationwide grass-roots network to push for final passage of the package, calling on restaurateurs to press their own lawmakers on the urgency of the need for aid. “Every member of Congress has their favorite place when they get home from Washington,” Kennedy said. “Communities of every size have lost a beloved restaurant. Members see that, and we work off of that.”

Those operating music clubs and other event venues made a similar pitch and secured $1.25 billion in grant money in the bill. That adds to $15 billion the sector landed in the $900 billion relief package approved in December. But venue operators say they haven’t received any of the federal money yet, as the Small Business Administration, which is overseeing the program, hasn’t established guidelines or an application process.

“We understand there’s a need to get this done right, and we’re in complete agreement with that,” said Audrey Fix Schaefer, communications director for the National Independent Venues Association. “But this was an emergency eight months ago. It’s even more dire now, and people cannot wait.”

The pandemic put the sector through a crash course in Washington influence. Previously, venue operators had no national association. A number of them formed the group at the beginning of the pandemic to lobby for federal relief, and the association now includes 3,000 members, with at least one in every state, Schaefer said. It shelled out $240,000 to hire a 10-person lobbying team from the firm Akin Gump, including former aides to House Speaker Nancy Pelosi (D-Calif.) and Senate Minority Leader Mitch McConnell (R-Ky.), lobbying disclosures show.

The group launched the “Save Our Stages” campaign and generated more than 2 million emails to lawmakers pressing them to back federal aid, according to Schaefer. Scores of famous artists joined the cause. Last month, Dolly Parton added her voice. “You know, attending live concerts is not an option right now, and many of our neighborhood independent venues, like the places I got my start, are at risk of closing forever,” she said in a video, directing viewers to the group’s website.

The industry has won high-profile support. Senate Majority Leader Charles E. Schumer (D-N.Y.) emerged as a vocal champion — and a conspicuous one, appearing in the halls of the Capitol and the streets of New York City sporting a “Save Our Stages” face mask.

But Schaefer said the industry remains in worse shape than restaurants, which in many cases have maintained some revenue by offering delivery, takeout and outdoor dining. And she said the sector faces a more uncertain timeline for getting back on its feet, because performers will need to be able to travel — and getting those acts booked and promoted “will probably take another three to five months.”

Gym and fitness studio operators have their own argument to make for the acuteness of their need. They argue that because their facilities have faced the same restrictions as restaurants and event venues, with similar economic fallout for their owners and workers, they should likewise get a dedicated federal aid program.

“Gyms were listed among the first to close and the last to reopen,” said Brett Ewer, the top lobbyist for CrossFit. He said roughly a fifth of U.S. gyms closed permanently last year. “Exercise and physical activity are such a fundamental good. We need places for people to engage in this activity in a communal way.”

The industry formed a coalition in October and has rallied behind a bipartisan bill, sponsored by Reps. Mike Quigley (D-Ill.) and Brian Fitzpatrick (R-Pa.), that would provide $30 billion. But it was not included in the broader relief package.

Aviation manufacturers fared better, in part by appealing to lawmakers from areas that are home to heavy concentrations of aviation and aerospace companies, including Washington, Kansas, and Virginia. An array of lobbying groups for the industry joined with unions representing their workers to ask for $15 billion that would fund a payroll support program, with the industry bearing half the cost. Lawmakers trimmed that sum to $3 billion and cut the length of the program from a year to six months.

“The bigger the better for helping, but we’ll take what we can get,” said Pete Bunce, president of the General Aviation Manufacturers Association. “Whatever they give us will be used to make sure the supply chain is secure as we come into the vaccination period.”

The package also includes funding for a handful of educational institutions. Howard University, Vice President Harris’s alma mater, nailed down $35 million, on top of $33 million it received from earlier pandemic bills; and Gallaudet University in D.C. and the National Technical Institute for the Deaf will get $19.25 million each, after each landed $11 million in the December relief bill.

The schools are all federally chartered, and the money for Howard, which gets direct congressional funding every year, ensures it won’t need to draw on other aid provided for historically Black colleges and universities, according to an aide for the House Education and Labor Committee. The money for Gallaudet and the institute are meant to help the broader deaf community those schools support beyond their immediate populations, the aide said.

Wed Mar 10 , 2021
Raya and the Last Dragon, directed by Don Hall and Carlos López Estrada, marks the House of Mouse’s first foray into Southeast Asian cultures and traditions. An action-packed animated comedy-adventure filled with breathtaking visuals and a hopeful message at the heart of its story, the movie centers on the […] 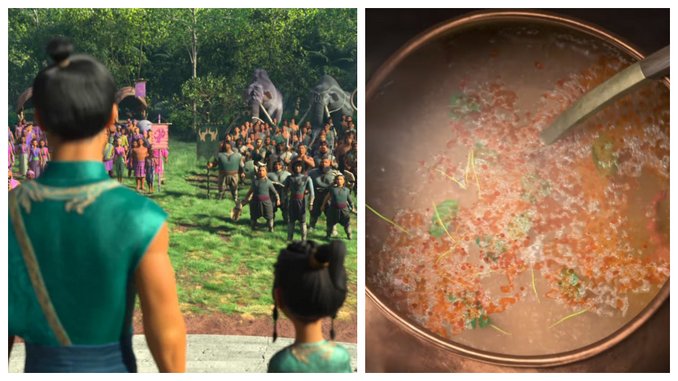