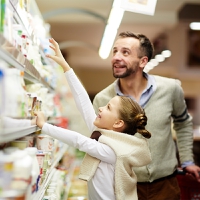 21 Jul 2022 — UK supermarket shoppers have been shocked to discover security tagging on cheese, butter and other packaged foods as inflation takes product prices to record highs.

While major retailers have denied that the additional packaging security represents a knee-jerk reaction to recently-elevated pricing, instead pointing to longer-term theft-prevention tactics, consumers have taken to social media to portray hard-lock tags on supermarket-brand cheddar and other everyday foods as symbolic of the cost of living crisis.

In June, the rate of UK inflation hit a 40-year high of 9.4%, while food prices rose 9.8% compared to June 2020, reportedly the highest growth in this category since 2009. Food costs also increased by 1.2% against the prior month.

“Britain in 2022… Lurpak butter is at £6 (US$7.20) a tub in Asda and even has a security tag on it,” wrote one shopper on Twitter. “If you think Lurpak is bad – the local Aldi and Co-op have started security tagging food. There was a GPS protected tag on a pack of lamb chops as well…” tweeted another. “The #CostOfLivingCrisis is real. My local supermarket is now security tagging everyday items, presumably because their price has increased so much. This isn’t Châteauneuf-du-Pape, this is instant coffee!” wrote one more.

A Tesco spokesperson tells FoodIngredientsFirst that some higher-value items sold in its stores may have security protection to deter shoplifters. “This is not a new policy,” they say.

Likewise, a Co-op spokesperson tells us: “Co-op has been involved in a small-scale trial of new packaging for higher-value products such as meat for several years, with the additional security providing a further deterrent if a store experiences shoplifting issues.”

Regardless, historically high food prices could be the new normal for UK retailers but also their European counterparts, warn Rabobank analysts. We speak to RaboResearch Food & Agribusiness’ senior analyst for consumer foods Maria Castroviejo, and dairy analyst Richard Scheper, about what is causing these elevated food prices and how long they might continue.Security tags on butter and cheese have baffled UK shoppers, but polling suggests Brits stole around £500M (US$595M) worth of everyday goods in 2021 (Image credit: @CharIieBennett/@Celeste_Tam42/Twitter).

Input prices force renegotiations
There are several reasons why food prices have skyrocketed, starting with the logistical and labor disruptions caused by the COVID-19 pandemic, notes Castroviejo. Supply chain upheaval was exacerbated in March 2021 when the Suez Canal was blocked for six days after the grounding of the Ever Given container ship.

“We also had energy prices already going up, grain prices going up, and the impact of droughts, so all input prices were already escalating last year,” she explains. “This triggered producers to bring increased prices to the retailers but, typically, these price negotiations take place twice a year, so the price increases started to be seen in retail shops toward the last quarter and this year.”

Since the turn of the year, Castroviejo says producers have increasingly looked to renegotiate prices with retailers as their costs head toward a breaking point. “We are seeing second and third waves of negotiations for much shorter terms, for all products, almost every month,” she tells FoodIngredientsFirst.The COVID-19 pandemic, Russo-Ukrainian War and other geopolitical uncertainties have taken European inflation to record highs.

Ukraine war fans flames
At the end of February, the war in Ukraine pushed the prices of grain and other commodities even higher. However, Scheper explains that the war’s worst impacts on the food industry have been largely indirect.

“Trade flows are really limited – there have been agro-bans in place since August 2014, impacting most large trade flows to Russia, so there was a big hit back then for EU cheese exports. Ukraine itself was a growing export destination because of the agreement that was put in place in 2017,” he says.

“Indirectly, we have seen increasing farm input prices, meaning corn and grains but also fertilizers, and, on the processing side, energy prices. All dairy products are relatively energy intensive. For a lot of milk powders, you need natural gas because you need the heat. And especially in Germany, they are concerned now about the availability of natural gas.”

“From a dairy perspective, the Russo-Ukrainian War didn’t put new topics on the agenda, but it did push inflation and logistical issues to a completely different level.”

Dairy prices to remain elevated?
The Rabobank analysts expect European dairy prices to remain at an elevated level this year and next and potentially worsen in the short term. Even if the Ukraine war is brought to a conclusion, geopolitical uncertainties elsewhere and droughts will keep prices high, they say.

“Although there are some big uncertainties globally, what China does with its import demand is crucial to dairy prices. They regulated levels of imports last year, and domestic production is growing. But also inflation in South East Asia and Northern Africa is important since demand growth for dairy in developing exporting countries is backed by population expansion and broad purchasing power,” explains Scheper.

“What also changed for dairy in the EU but also the UK is that we came out of a decade with mostly surpluses in milk. The dynamic has changed, and there is also more competition for milk, which might also contribute to keeping prices at an elevated level.”

Meanwhile, Castroviejo explains that elevated food prices in UK supermarkets are not unusual compared to the EU and the rest of Europe. According to the UK Office for National Statistics, inflation levels for butter increased by 13.1% in May year-on-year. However, Eurostat recorded butter prices up by 28.3% across the Eurozone and as high as 46% in Germany in June year-on-year.

“We don’t foresee cheaper food in the near future unless we have food retailers entering the price war,” she concludes. Meanwhile, security tags on everyday food items may grow increasingly common.

Thu Jul 21 , 2022
NEW YORK, July 19, 2022 /PRNewswire/ — The Culinary Tourism Market is expected to grow by USD 31.42 billion at a CAGR of 6.53% during the forecast period. The rising preference for culinary tourism is notably driving the culinary tourism market growth. The market is segmented by type (domestic and international) and […] 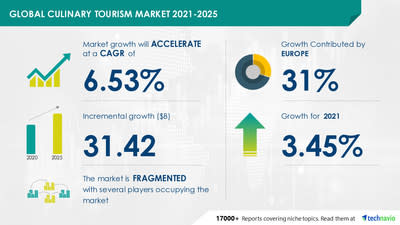