Who started the rumour that Canadians are polite? Most, sure. All? Definitely not. Just ask the restaurant staff on the receiving end of invective, expletives and other assorted not-so-niceties. And these aren’t pedestrian party fouls—we’re talking mid-meal pedicures, late-night larceny and big drinkers blowing a fuse. We asked industry insiders for the stories that have stuck with them. Here, a ranking of the worst of the worst.

11“I was working in a sushi restaurant, and one guest tried to argue that the mango in the mango sushi roll wasn’t mango. It was. Why wouldn’t it be? What would we replace it with? But she wanted me to prove to her that it was mango. How do I even do that? Dig the peel out of the garbage?”
—Vee S., server

10“I used to work at a restaurant downtown. One day, a guy sat down and put a $20 bill on the table when I came to greet him. He said, ‘This is your tip. Every time you do something wrong, I will remove a dollar.’ I thought he was joking, so I chuckled and asked, ‘Something wrong?’ He immediately took the 20 off the table, replaced it with exactly $19 in change and said, ‘Like that.’ Who carries around enough change to do that? He continued in that fashion for his entire meal. I didn’t even care about the tip at that point.”
—Server, Financial District

9“I grew up in the ’70s, so when I went to restaurants as a kid, I sat quietly and behaved—there was no other option. These days, I’ve noticed that there are a lot more of what I call ‘free-range children.’ Parents will come, cuddle up with their friends and lattes, and the next thing you know, their kids are treating the café like it’s a playground. One day, a couple of parents were sitting and chatting, and their kids were sprinting from the front of the café to the back—over and over again—laughing with joyful abandon. Now, the last thing I want to do is ask the kids to stop—it’s never a good idea to parent other people’s children. Of course, they’re kids and they want to have fun! But there are servers walking around the café with hot drinks and plates of food, and I was afraid someone would get hurt. I asked the moms if they would mind keeping their children close to them, and they looked at me like I was the devil. How dare I contain their kids’ beautiful free spirits? A moment later, one of the kiddos ran full tilt into a guest’s table, hitting the floor and screaming at max decibels. He was okay, save for a goose egg, but it was a shame he had to learn his lesson that way.”
—Dawn Chapman, owner, Lazy Daisy’s Café

8“We received a call from a woman who had a reservation for a large table later that week. She told us that she and her guests ‘need to be respected at all times,’ then went on to complain about our restaurant’s lighting, temperature and method of service. Did I mention she’d never even been to our restaurant? She just wanted to make sure everything was going to be to her liking before she arrived. She ended the call by letting us know that she wouldn’t be tipping. ‘We already pay tax on our meal, so there’s no reason to be charged more. This has been a problem with servers in the past, so we’re letting you know in advance.’ We couldn’t wait to serve her.”
—Server, The Village

7“We had a client make a reservation at Fat Pasha, and in the online form, he requested that we put a candle in a cheesecake for dessert—one of the guests was celebrating a birthday. So, when dessert time rolled around, we put a candle in a cheesecake and brought it over to the table. All good, right? The next day, he called us, absolutely furious. He had just looked at the bill and realized that we had charged him for the cheesecake. He said something to the effect of, ‘The nerve of you to charge me for what should have been a free birthday dessert.’ We told him that Fat Pasha isn’t a TGI Fridays. He then told us that he would never return to any of our establishments and that we should be ashamed of ourselves.”
—Anthony Rose, owner, Fat Pasha

6“When I worked at a downtown bar that was popular for after-work drinks, one customer would frequently drop a $20 bill and tell me that, if I bent down to get it, I could have it. Needless to say, I never did.”
—Carla, server

5“Last week, I left my bar at 1 a.m., knowing that my team could close up. But I forgot my laptop, so I went back—only to watch four customers walk out with our cocktail glasses in hand. I stopped them and they sheepishly gave the glasses back. I asked them not to return in the future. When I came in the next day, a $350 sculpture from the gallery entrance of our bar was missing. We looked back at the security footage, and of course it was the same guests—one had the sculpture under his coat! Moments later, a bad Google review popped up, trashing our service. We compared the name to those on the previous night’s wait list, and guess who it was? We sent the surveillance footage to the number they had used to book their reservation. The bad review vanished, and 30 minutes later they returned, sculpture in hand.”
—Robert Granicolo, co-owner, Cry Baby Gallery

4“I was managing a restaurant in one of the city’s high-end hotels, and I once had a customer ask me how much he needed to tip to get one of my servers to go home with him. We told him that he should instead finish up his drink and leave. Then we politely asked him not to return.”
—George R., manager

3“We once had a gentleman sit down at our pub, settle in, order nachos and…proceed to use one hand to eat the nachos and the other to massage and pick at his feet. Shudder. Everyone felt pretty ill.”
—Lisa M., server

2“I used to work at a small upscale bar in midtown. One evening, a table of five was drinking double Grey Goose and sodas like water. One of the men was very loud, and after three polite—but unsuccessful—requests for him to lower his voice, it was clear that he needed to be cut off. I kindly let him know we couldn’t serve him any more, and he became enraged. The whole table turned on us, yelling and getting right up in our faces. It was terrifying. Everyone in the room was focused on the action. The owners tried to calm the table down, but they all stormed out without paying their bill—which was over $1,500.”
—Keegan D., sommelier and bartender

1“Once, at a spot where I worked in the east end, a customer ordered the homicide wings. After a bite or two, he started coughing violently, then came charging into the kitchen and pinned me to the wall. He said, ‘You tried to kill me with those wings—now I am going to kill you.’ Look, they’re called homicide wings for a reason. He was quickly shown the door.”
—John M., line chef

She was adopted by Ontario family as 13-month-old. Now, she's connecting to her Chinese heritage

Tue Jan 24 , 2023
Meika Clarke was 13 months old in Jiangxi, China, when she was adopted by an Ontario family. Now, more than 26 years later, she’s learning to connect with her Chinese heritage on Lunar New Year.  “I’ve never gotten the opportunity to celebrate my Chinese identity,” Clarke said. Asian Adoptees of […] 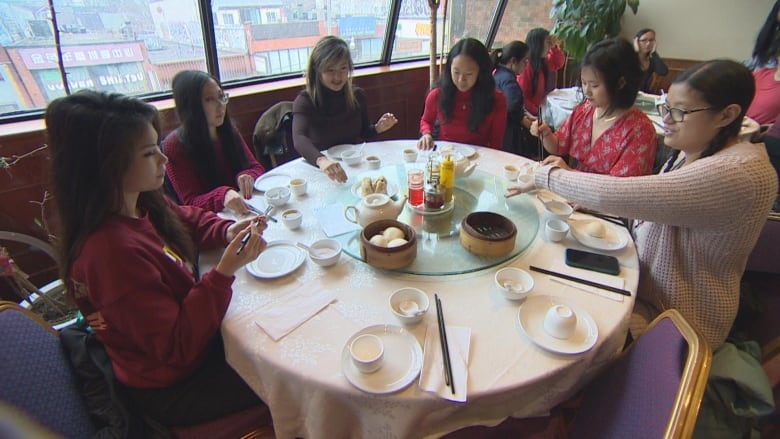