LAS VEGAS — From a vaccination site in the desert West to a grade school on the Eastern seaboard, President Joe Biden’s top messengers — his vice president and wife among them — led a cross-country effort Monday to highlight the benefits of his huge COVID relief plan.

Biden, Vice President Kamala Harris and their spouses have launched an ambitious tour this week to promote the $1.9 trillion plan as a way to battle the pandemic and boost the economy.

The road show — dubbed the “Help is here” tour by the White House — began with Harris visiting a COVID-19 vaccination site and a culinary academy in Las Vegas and first lady Jill Biden touring a New Jersey elementary school. Biden himself heads out Tuesday.

“We want to avoid a situation where people are unaware of what they’re entitled to,” Harris said at the culinary academy. “It’s not selling it; it literally is letting people know their rights. Think of it more as a public education campaign.”

On Tuesday, Harris is scheduled to visit a coronavirus vaccine clinic at Salud Clinic in Fort Lupton and meet with small business owners at Maria Empanada in Denver before returning to Washington.

The White House is wasting no time promoting the relief plan, which Biden signed into law last week, looking to build momentum for the rest of his agenda and anxious to avoid the mistakes of 2009 in boosting that year’s recovery effort. Even veterans of Barack Obama’s administration acknowledge they did not do enough then to showcase their massive economic stimulus package.

Biden stayed back in Washington for a day, declaring that “hope is here in real and tangible ways.” He said the new government spending will bankroll efforts that could allow the nation to emerge from the pandemic’s twin crises, health and economic.
“Shots in arms and money in pockets,” Biden said at the White House. “That’s important. The American Rescue Plan is already doing what it was designed to do: make a difference in people’s everyday lives. We’re just getting started.”

Biden said that within the next 10 days, his administration will clear two important benchmarks: distributing 100 million stimulus payments and administering 100 million vaccine doses since he took office. To commemorate those milestones, Biden and his top representatives are embarking on their most ambitious travel schedule of his young presidency, visiting a series of potential election battleground states this week.

The latest from the coronavirus outbreak in Colorado:

Senate GOP leader Mitch McConnell dismissed the target of doses that Biden set when he took office as “not some audacious goal” but just the pace that he inherited. And he mocked Biden’s talk of Americans working toward merely being able to gather in small groups by July 4th as “bizarre.”

The Biden plan cleared Congress without any backing from Republicans, despite polling that found broad public support. Republicans argued the bill was too expensive, especially with vaccinations making progress against the virus, and included too many provisions not directly linked to the pandemic.

After beginning the sales campaign with high-profile speeches, Biden will head to Pennsylvania on Tuesday and then join Harris in Georgia on Friday. Others on his team are visiting the electorally important states of Nevada, Colorado, New Mexico and New Hampshire. The trip Monday marked Harris’ first official journey in office and included an unscheduled stop at a vegan taco stand as well as a coffee stand at the Culinary Academy Las Vegas.

White House press secretary Jen Psaki said, “We want to take some time to engage directly with the American people and make sure they understand the benefits of the package and how it is going to help them get through this difficult period of time.”

The White House has detailed a theme for each day, focusing on small businesses, schools, home evictions and direct checks to most Americans. Jill Biden was joined by New Jersey Gov. Phil Murphy on a tour Monday of Samuel Smith Elementary School in Burlington, where she highlighted steps the school took to reopen.

But her tour revealed the challenges ahead: In one classroom she visited, only two students were in attendance for in-person learning while the other 17 were virtual. The first lady sat down at a computer to say hello to the remote learners.

“I just I love being here at a school again: Educators, parents and students, the entire school has come together to bring kids back to the classroom,” she said. “But even with your best efforts, students can’t come, they can’t come in every day, which means that their parents are still having to take time off of work, or figure out childcare solutions. And this school like schools across this country can’t fully reopen without help.”

The president on Monday also announced that he had chosen Gene Sperling, a longtime Democratic economic policy expert, to oversee the massive stimulus package, the role Biden himself had played for the 2009 economic rescue package. The goal, Biden said, is to “stay on top of every dollar spent.”

“I learned from my experience implementing the Recovery Act just how important it is to have someone who can manage all the moving parts with efficiency, speed and integrity and accountability,” said the president.

The plan’s key features include direct payments of $1,400 for most single taxpayers, or $2,800 for married couples filing jointly, plus $1,400 per dependent — a total of $5,600 for a married couple with two children. The payments phase out for people with higher incomes.

An extension of federal unemployment benefits will continue through Sept. 6 at $300 a week. There’s $350 billion for state, local and tribal governments, $130 billion for K-12 schools and about $50 billion to expand COVID-19 testing, among other provisions.

Restaurants and bars that were forced to close or limit service can take advantage of a new multibillion-dollar grant program, and the plan also has tens of billions of dollars to help people who have fallen behind on rent and mortgage payments.

Harris’ husband, Doug Emhoff, joined his wife for the Western trip, visiting a food relief organization Monday in Las Vegas and participating in a listening session with the organization’s partners. In addition to the president, vice president and their spouses, Cabinet secretaries will also be out on the tour. Hundreds of mayors and governors, including Republicans, are being lined up to give interviews to discuss what the plan means for their communities.

‘I Have No Money for Food’: Among the Young, Hunger Is Rising

Tue Mar 16 , 2021
PARIS — Amandine Chéreau hurried from her cramped student apartment in suburban Paris to catch a train for an hourlong trip into the city. Her stomach rumbled with hunger, she said, as she headed for a student-run food bank near the Bastille, where she joined a snaking line with 500 […] 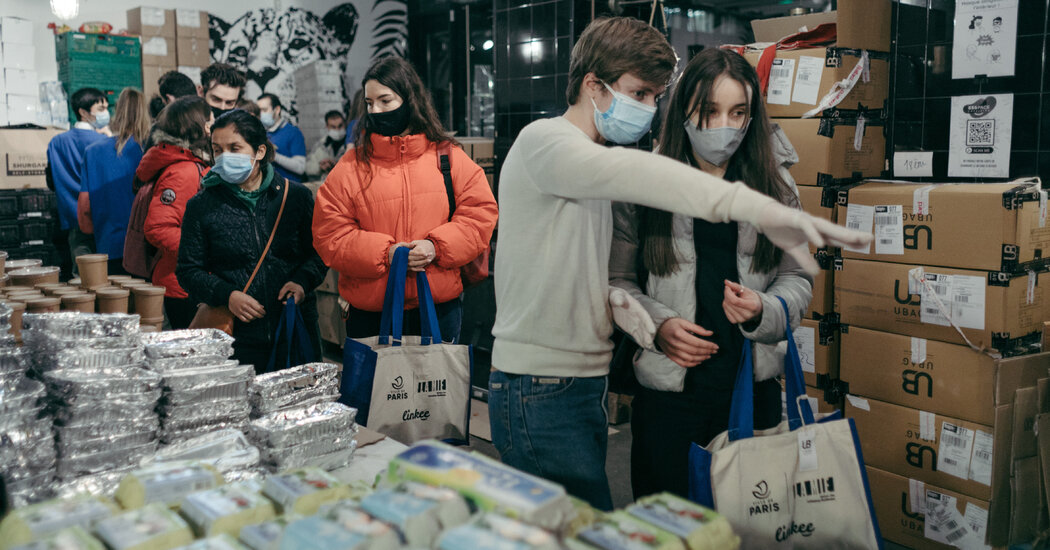