How do you even describe curry? Flavorful, aromatic, rich, creamy and perhaps spicy come to mind. But while those who are familiar with curry have vague ideas of what it is, curry is such a broad category that encompasses such a diverse array of dishes, it’s difficult to explain what is considered curry and what isn’t.

As a second generation Indian American who grew up eating what many would consider “curry,” I never heard the word “curry” at home or in my community — and that’s because the term isn’t Indian at all.

“I think ‘Indian-ish’ is a useful word to explain curry,” said Krishnendu Ray, associate professor of food studies at New York University and editor of “Curried Cultures: Globalization, Food and South Asia.” “What is a sauce in French cuisine? The sauce can be butter-based or broth-based; the sauce can be creamy; the sauce can be acidic. The sauce can have different ingredients and flavors. That’s the best analogy for curry.”

The word “curry” was used as an umbrella term by British colonizers in India as a simple way to reference saucy Indian dishes — dishes that came from across regions of a country with myriad cultures and 19,500 languages, dishes that used different types of ingredients and weren’t necessarily related to one another at all. Some etymologists suggest that the word “curry” was derived from the word “kari,” which means pepper or spiced sauce in Tamil, a South Indian language.

So you can see why curry is hard to explain: It’s more of an idea than one tangible thing. And curry powder adds another layer of complexity.

The British wanted to capture the nuanced, spiced flavors of the dishes they were eating in India and bring it back home. That’s actually why they developed curry powder — which also isn’t used in traditional Indian cuisine. Curry powder is a blend of spices like turmeric, cumin, ginger, coriander and chile, and became a portable way to try and replicate flavors of Indian dishes. When a dish is “curried” as in “curried chicken salad” or “curried cauliflower,” that essentially just means curry powder, or other Indian spices, are used to flavor it.

Today, there are versions of curry all over the world, influenced by cultural and political factors, as well as immigration and tourism. And that largely also determines what is called curry and what isn’t. For example, South Asian dals, or lentil stews, are considered curry, while Ethiopian misir wat, creamy Ethiopian-spiced red lentils, are not considered curry.

That’s because the name “curry” was imposed by the British and then popularized by tourism, Ray explained. For example, saucy Thai dishes that the world knows as green curry, red curry and massaman curry are referred to as such because the tourist economy that the country relies on benefits from labeling dishes in a way that foreign tourists understand. Since tourism wasn’t a large part of Ethiopia’s economy, that’s one reason dishes like misir wat retained their names, Ray said.

The various forms of curry tell the story of spices, colonization, globalization and immigration. Here are a few examples:

Indians and other South Asians don’t use the word “curry” because it’s largely a catch-all term for so many dishes. Examples include chana masala, chicken tikka masala (which has an interesting origin story), lamb korma and xitti kodi (Goan fish curry). You’ll find versions of these dishes with different cultural twists all over South and Southeast Asia, from India to Malaysia and Myanmar. The curry that most people know about in the West was popularized in the 1850s and early 1900s by Bangaldeshi members of the British merchant navy who settled elsewhere and opened Indian restaurants, often in port cities.

“They become a part of this global economy of what is called Indian curry in London, in New York, in New Orleans,” Ray said.

Depending on the region the dish is from and the cook’s preference, South Asian curries can be coconut, cream, yogurt, water/stock, tomato or nut-based — or a combination. Most start with sautéing aromatics like onions and garlic. They can be spicy or mild. They can be the texture of a thick puree, like saag paneer, or gravy-ish, like korma, and they are eaten with rice and flatbreads like naan, chapati and paratha.

Today, curry is synonymous with South Asian food, and, while many have embraced the term as a simple way to describe saucy dishes, others feel that it’s an erasure of cultural nuances and find it offensive.

What we know now as Thai curries has roots in Indian cuisine thousands of years before British colonialism. However, the popularity of the term “curry” led to standardizing these dishes and labeling them “curry” in tourist-heavy Thailand.

“It’s not like there was a green curry, a red curry and a yellow curry originally in Thai cuisine,” Ray said. “People were making versions of these dishes but they weren’t named or standardized in this way. That emerged as part of the tourist economy.”

Thai curries have a different preparation style and flavor profile than South Asian curries. They’re typically made by first creating and sautéing a concentrated paste with ingredients like lemongrass, galangal, shrimp paste, makrut lime leaves and chiles, then adding coconut milk, vegetables, meat and flavorings like fish sauce. The exact ingredient list depends on the type of curry. Thai curry is eaten over rice and, unlike South Asian curry, is not typically served with bread.

The creation of Japanese curry was almost like a culinary game of telephone.

“It was the Japanese absorption of the British interpretation of Indian curry,” Ray explained. “And why did they do it? They saw the British spreading curry and read it as an example of a cosmopolitan global dominating culture — which was Japan’s ambition.” Eating curry became a mark of sophistication, and Japanese cooks took the concept and ran with it.

Today, curry is indeed one of the most popular convenience foods in Japan.

Like curry elsewhere, regions and families have their own versions of Japanese curry (kare), typically a thick, sweet and mild sauce. Japanese kare raisu is made with kare roux, potatoes, onions and carrots, with beef or chicken and served over rice with fukujinzuke (a type of tsukemono, or Japanese-style pickle), while katsukarē has tonkatsu (panko-breaded pork cutlets) or chicken katsu served atop the rice and sauce. To make kare at home, you can buy blocks of kare roux, which incorporates curry spices, fat and flour, and allows you to instantly create a thick gravy.

Curry has different interpretations depending on where you are in the West Indies. In places like Guyana and Trinidad, which are heavily populated with people of Indian descent (Indians were brought there as indentured laborers in the 1800s), the curries have some similarity to what would be found in India. But they will often use local ingredients, like Scotch bonnet peppers, and goat as the main protein.

Jamaican curries are much more influenced by the British interpretation of curry, as these curries are made with curry powder and may include ingredients like Worcestershire sauce and vinegar. Jamaican curry powder is also different from curry powder used for British Indian food, as it often includes allspice, nutmeg, and Scotch bonnet peppers. Coconut milk or broth is added, along with vegetables and meat, and it is served with rice, beans and sides like plantains.

Like Jamaica, West African countries like Nigeria were introduced to curry powder by the British, and they put their own spin on it and using it in chicken or goat curries. It’s often used in egusi soup, sometimes called egusi curry, a popular Nigerian dish made with melon seeds, meat and vegetables (in Ghana, it’s called agushi curry or stew). West African peanut (or groundnut) stew, made with starchy vegetables and meat, is also sometimes referred to as a curry.

West African curries are known for their heat and ample use of chile pepper. Curries here are served with a variety of accompaniments, including diced citrus fruits, peanut, chopped dates, ground dried shrimp, mangoes, papayas and bananas, helping to balance out the heat.

South Africa has one of the largest populations of people of Indian descent outside of India, as many were brought there in the 1800s as indentured servants. There, in the city of Durban, they’ve developed their own unique South African Indian curry dishes that are often a thinner consistency and even spicier than their Indian counterparts. In fact, Durban curry is a bright, fiery red, denoting its heat, and varieties include Zulu chicken curry, mutton and fish.

Durban curry was created as an act of survival amidst apartheid and evolved based on the ingredients people had access to, like dried fish and potatoes, which are used to thicken the water-based curry in place of coconut milk. Then, the dish evolved into the street food bunny chow, which features a quarter, half or even full loaf of bread that’s hollowed out and filled with curry.

Tue Jul 13 , 2021
Walking around Saratoga Springs or Ballston Spa, one might miss the lush verdant landscapes growing just behind the sprawling homes. That includes the garden owned and cultivated by master gardener Kimberly Purdy of Saratoga Springs. She mixes perennials with fruits and herbs in a gardening style she describes as “controlled […] 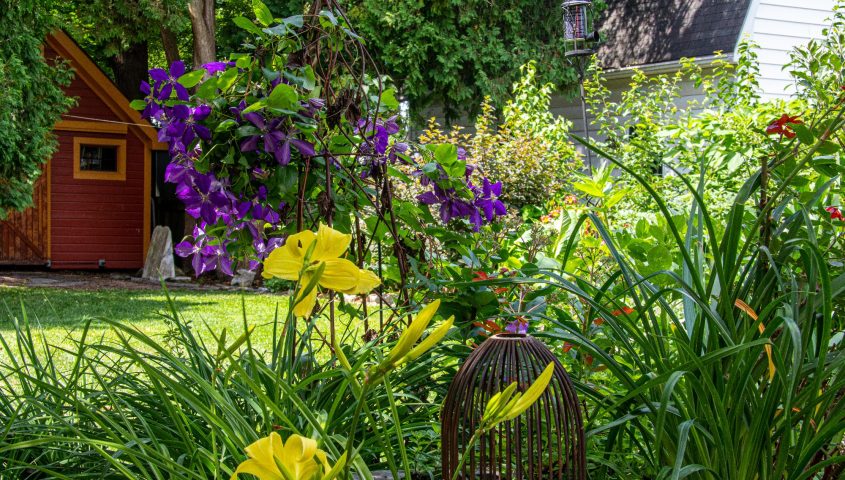